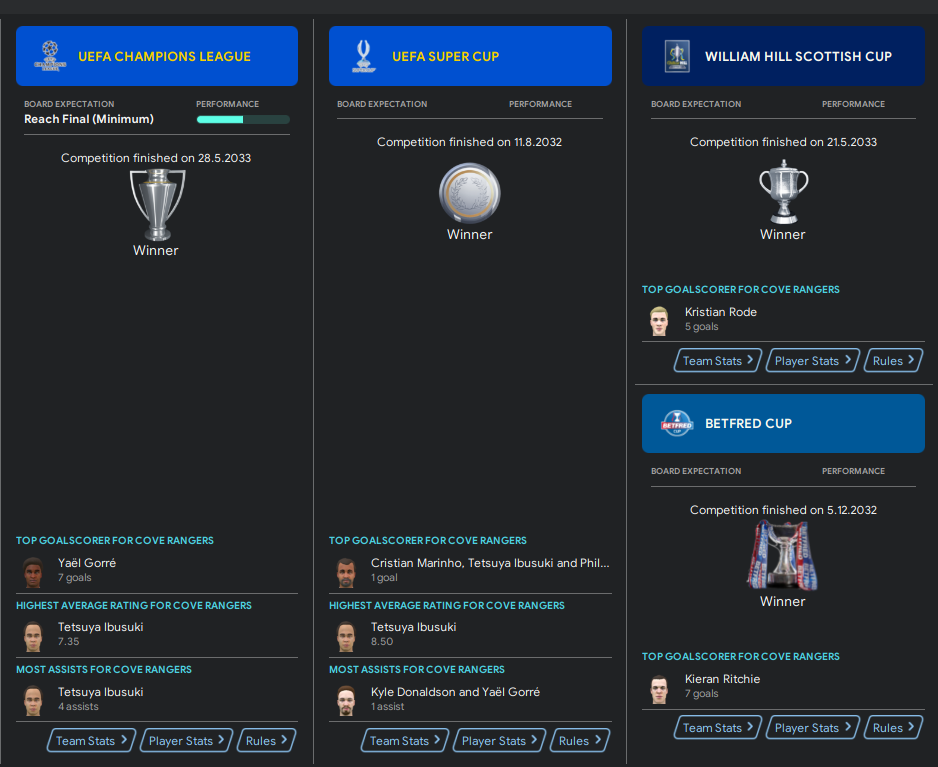 140 goals in the Premiership 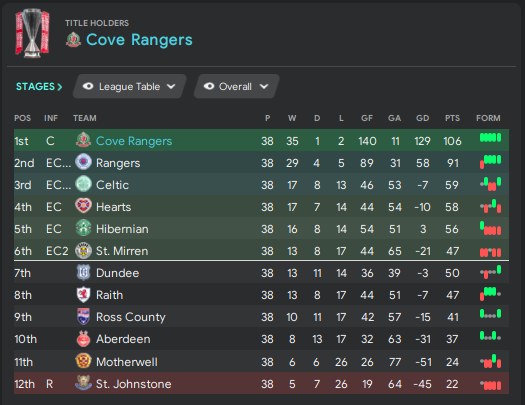 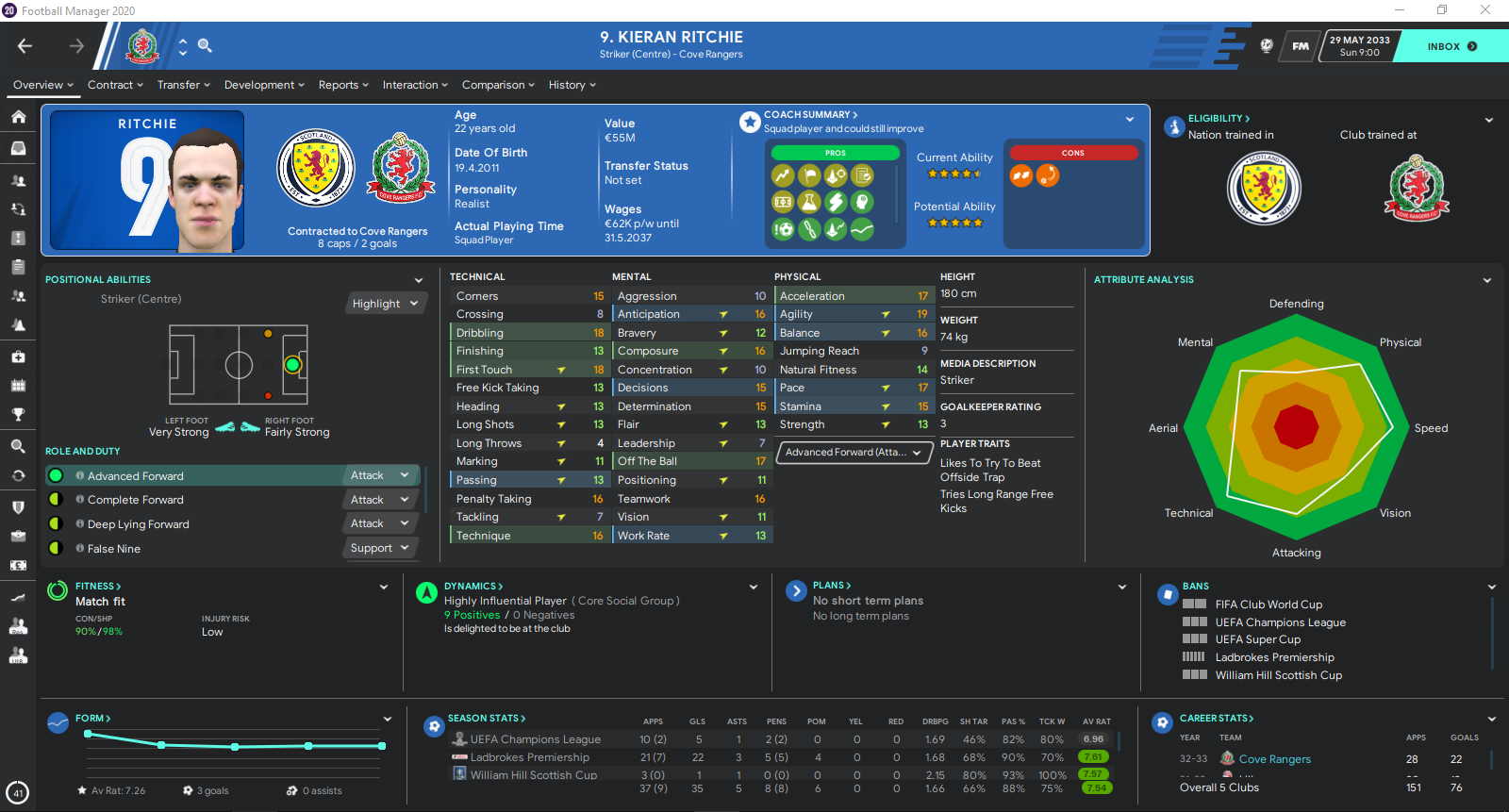 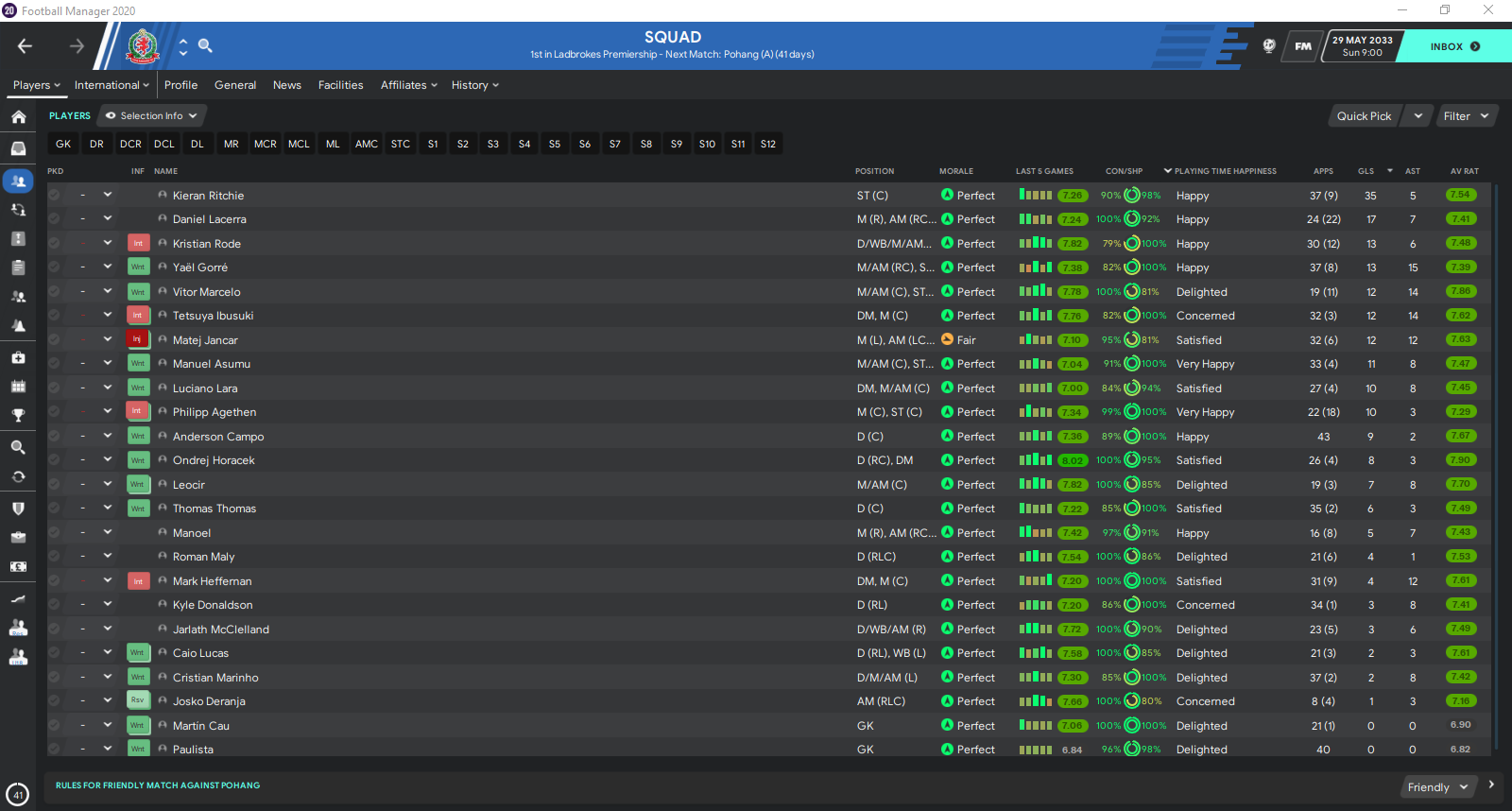 0 goals conceded at home across competitions 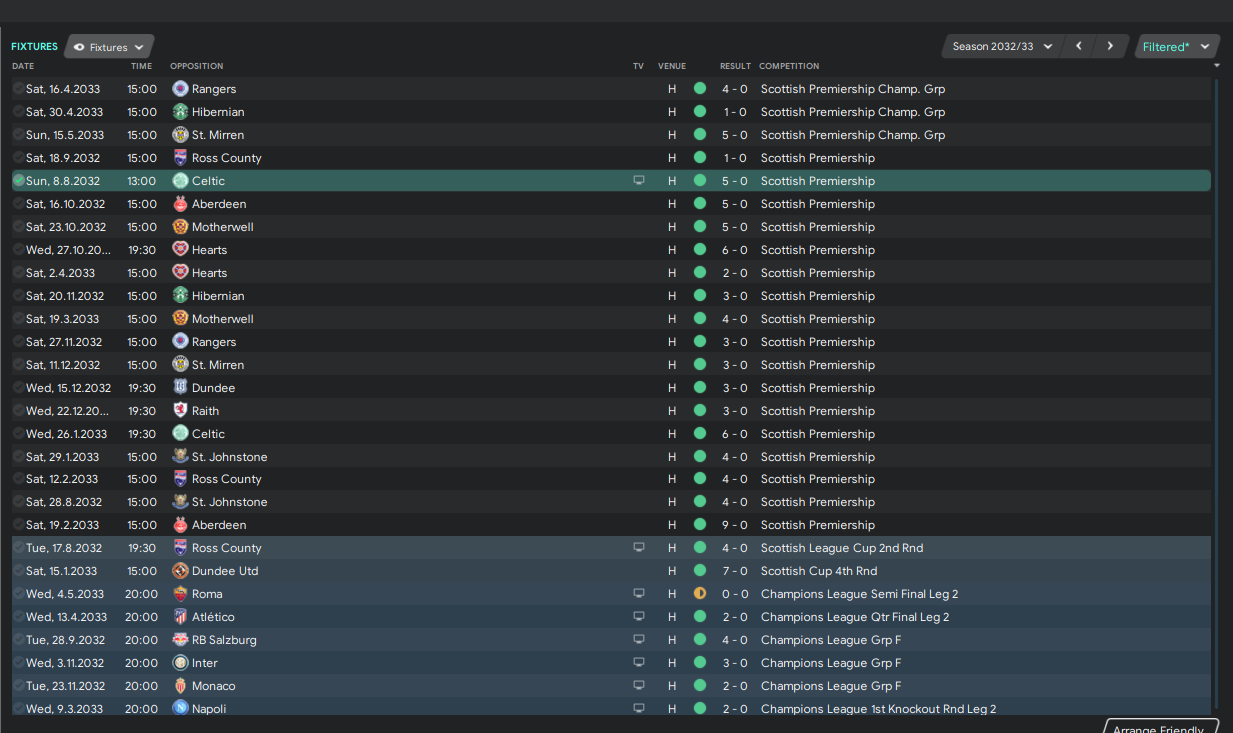 we are giants now

Depressing. By 2032 Cove Rangers will have won more CL titles than Juventus

boys returned from 2 weeks holiday to win the cwc 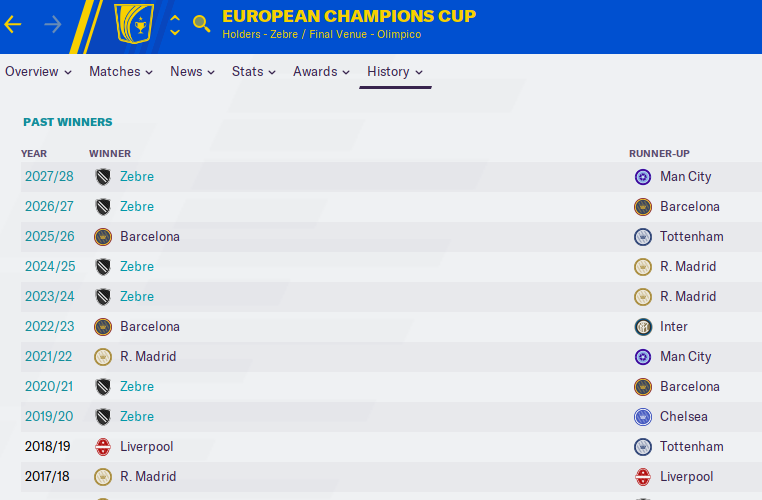 And I'm almost certainly going to win it this year too. Just bought two world class regens in attack so my squad is crazy strong

I think they should go with someone complete random instead. Like Pokemon collectors or maybe something to give a hint, like... The goats or Mountain folks or Really close to Milano FC, or why just go full nude and go with Fiat? Or maybe for PR, go by The gender fluids FC. I dunno but I kind of like Old lady too, I named my group of friends "clan" in Battlefield to Old farts. Not specifically because we were old but because it had a touch of Juve. I'm sure I could make something up from the fartsy thing resembling Juve's taste of defeats in CL but I won't go there.

The board has screwed me over, and then some.

My Sheffield has done well, I dunno what I've written about our progress but we stepped up from Championship and in the first year of EPL we had a OKrun until fatigue set in and we dropped down and down. Struggled with consistency throughout games. Ended up 10th (W13, D12, L13) but won on ET against Arsenal.

Next year we managed to increase our width, sign some of the those on loan and got into 5th place in the league. Got knocked out in the FA semi against Spurs and to Milan in UEFA cup in the quarters.

Last year we pushed hard against Pool and United in an incredibly tight title race. I never really had the intention to win since I was only aiming for CL place but towards the end Pool and Utd dropped in form. My team on the other hand after a change of tactics in late autumn went into trance and just kept winning, even won the UEFA cup in a very even game against Spurs and won the Carabao cup on ET over City. Lost only two games that season, in the FA cup final to City and at home in the league against Pool.

I have had a lot of deadwood and tried to build incrementally so there has been a lot of players going in and out. This summer I only signed one player, i emptied my entire transfer budget and signed Alexander-Arnold. I have had a lot of freebies each year that I've later sold to make up funding. Going into the season I was quite satisfied with my squad, I still need a WC B2B player since Sean Longstaff isn't as good as I first thought.

We are still rather early in the season and are doing well so far. Won Community shield against City, 2-0, won UEFA Super cup against PSG with 4-0. In CL We've only played three games so far but won all against Roma, Monaco and Leverkusen. Had a crazy game against to Pool that I still don't understand how we lost (4-3), we had some brain lapses in the back and in the front. Should have won by a large margin. Also had a brainfart against Southampton away and lost 1-0 but otherwise we have won every game. Esposito is completely mental when he is not surrounded by transfer rumors. Scored five against West Brom and six against City. In total he has 23 goals in 11 games so far this season. Seems that continuity this summer has led to a good start but Pool have won every single game so we're trying to stay alive in the top.

Over the past 2-3 years the owner has been trying to sell the club so every 2-3 months someone is in negotiations with him and the club is in lockdown. Extremely annoying because a lot of projects gets closed or frozen. Each won has broke down until a week ago when suddenly someone purchased the club out of the blue. Apparently the new owner had promised to buy Ruben Neves. I am stacked AF in MC. I play with two sitting MCs and one AMC. Both my AMCs I play with are natural MCs and have played there a lot over the years. I have five other MCs and I have issues given them playing time. Since the purchase of Alexander-Arnold I sold my backup RBs (I had two) for close to 30m to finance the acquisition. After all of that I now have transfer budget of 8m and 42k left in my p/w salary budget. My highest earner is Esposito on 150k per week. The new owner has now purchased Ruben Neves for 77m and given him a salary over 200k. He is a decent player, not saying he is not and he might make it to the bench. But come on... I spent years to slowly build everything up including financially and then this ass**le comes in. How will Esposito and the others that complain about their salary every now and then? I have been incredibly strict with the salaries because we are still building e.g. commercialization, to afford higher day-to-day costs. I've wanted to build a new arena for years but it has never been accepted even though it is in poor shape and always full. Couldn't the new owner have spent that money there instead?
OP
OP 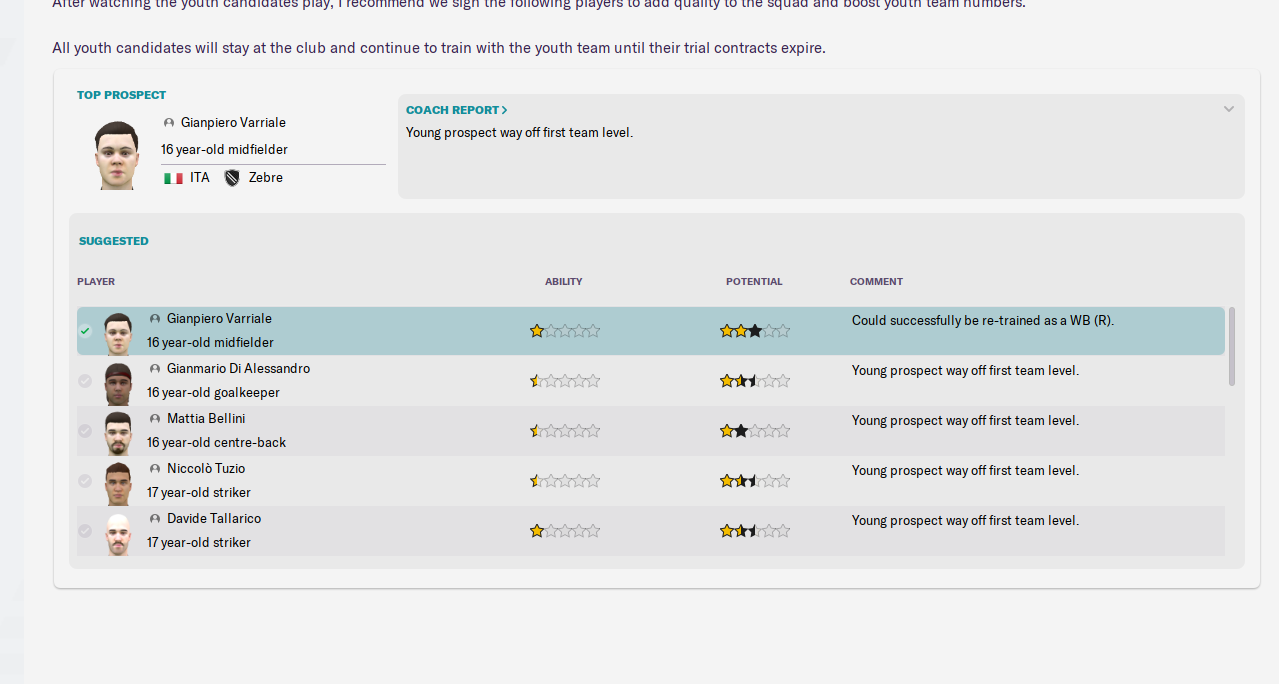 LOL wow, they are awful.

I quit Juve because I just got bored with it. I had too many players to even be able to field them in the first team squad, U23, U20 and U18 stacked with talents, plus 100 players on loan to other clubs, who were probably worth well over €1Bn in value if I sold them all, plus a bank balance of €900m. Literally no challenge there at all.

I took over at Cordoba who are just in the relegation zone in LaLiga2 in December. Absolutely shit team with no money (€325K), 1 striker, crap coaching, scouting, no DOF, over wage budget. It's like a different sport, I can't even sign or loan anyone to help the team. Just relying on my system and team talks to maybe get lower mid-table. I was going to take over an ARG/BRA team instead, kind of regretting it now.

I have so many Wonderkids now I'm loaning them out lol


Trying to find Asian wonderkids though... 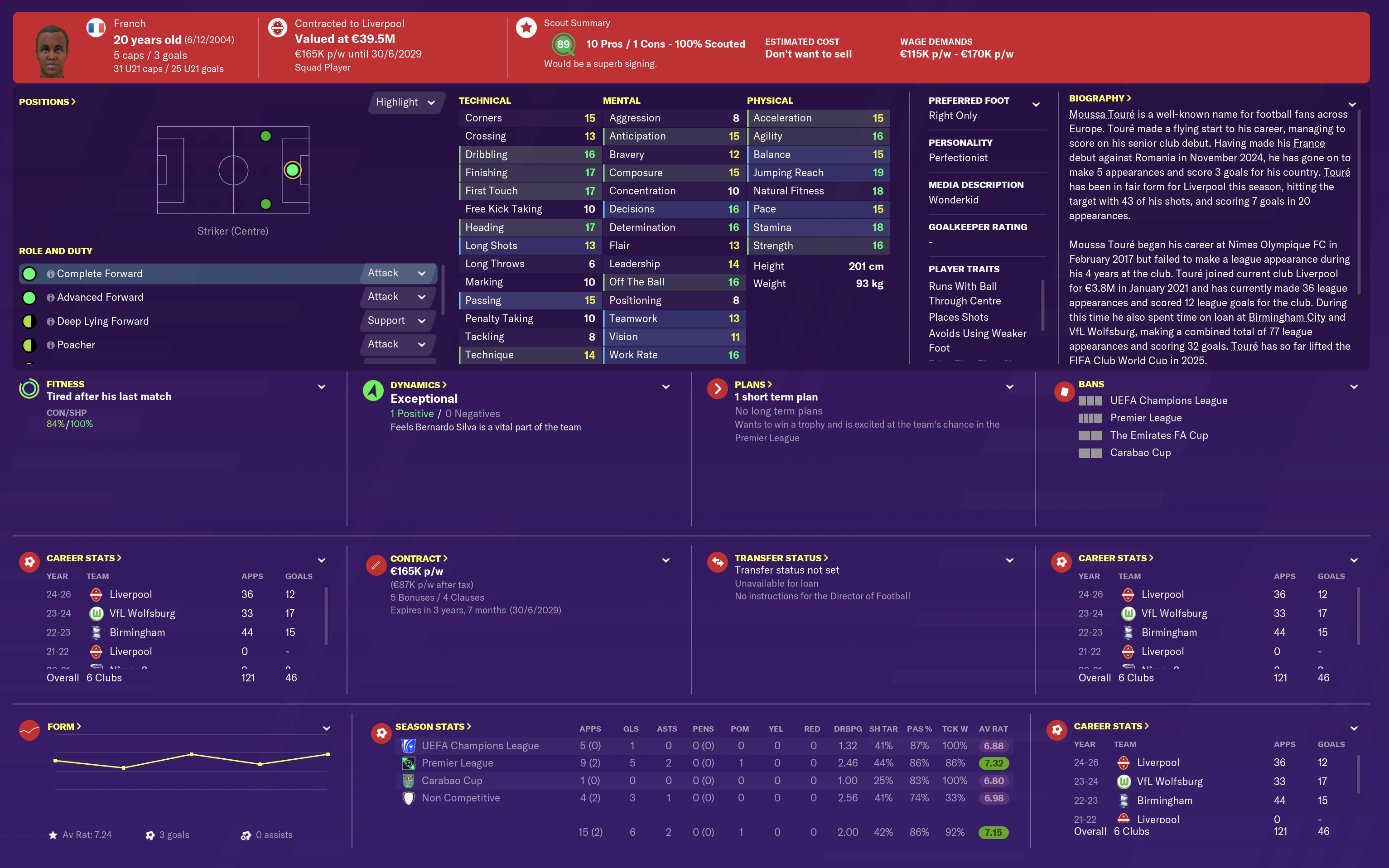 How does one stop that?
OP
OP

Hustini said:
I have so many Wonderkids now I'm loaning them out lol

Also technical skills of a quality forward and strong mentally.

it's crazy. I was tracking him way back when he was in Amiens but opted not to go for him. He looked poor but the scouts saw potential.
Regrets...

As long as your scouts are good I would generally trust what they say. Their judgement normally correlates directly with the player's PA. Also if you see teams like Liverpool, City etc after a player they usually always have a high PA.

JuveJay said:
As long as your scouts are good I would generally trust what they say. Their judgement normally correlates directly with the player's PA. Also if you see teams like Liverpool, City etc after a player they usually always have a high PA.
Click to expand...
Sounds extremely reasonable. I'll follow that advise, thanks!
OP
OP

JuveJay said:
As long as your scouts are good I would generally trust what they say. Their judgement normally correlates directly with the player's PA. Also if you see teams like Liverpool, City etc after a player they usually always have a high PA.
Click to expand...
this. if you see a young player with Liverpool, City, Barca interested then jump on them. 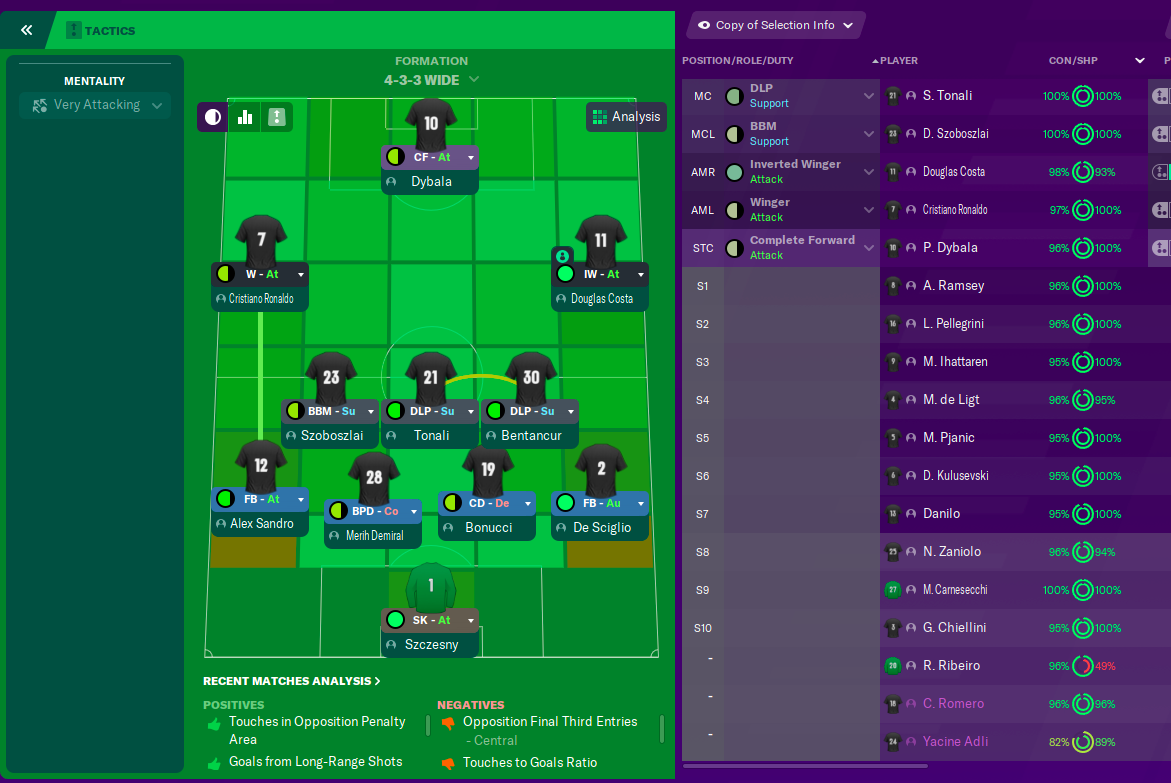