Kyle said:
tbh I think he did that (and probably the Wanda folder) intentionally hence why he screenshotted a windowed version of the game displaying all his icons. For attention or something, idk he's a fucking weirdo.
Click to expand...
You give him too much credit. He ain't that smart.
OP
OP

DAiDEViL said:
You give him too much credit. He ain't that smart.
Click to expand...
isn't he married though and has kids? He just has a "Wanda Icardi" folder on his desktop?

I might buy it more if he had his own room, in a home for the feeble minded, but he lives with people who will see that.

And it doesn't take smarts just a sad desperation for any sort of attention. Or meth. It could just be the meth he does.

So the verdict is don't buy fm20

I got to give you cred, @Gagi, I am still playing with my Brescia and in the beginning of year two. Incredibly hard to do anything. Big kudos to you for sticking and having the patience to manage your teams and running them up that hill.

I used up my entire transfer budget of 8m and feel like I didn't achieve anything with. In particularly, because I am the dumbest person alive. I signed Tonelli, Pardo, Proper, Maroni, Mansilla, Allan, and two regens for my youth team, for free. Then I signed Giannetti, Cortes, Abram, Vignato and Reinier. Balotelli didn't want to extend his contract initially and while he over time became more willing to do so, I did not. I tried everything, but the man is kind of pointless in my save. Since I knew I would let his contract expire I was searching all over the world for a year for a striker that was young, CHEAP and willing to come to us.

Finally I found Cortes and Reinier and signed them come the end of season 1. Then... during the pre-season the game asked me to prioritize non-EU players or something and I couldn't click on anything or chose anything so I just clicked continue. Then I learned that mr smarty-pants had signed too many non-EU players. So I figured - OK - I'll sell some, so I sold Mansilla even though he was actually registered, because I wanted to give his spot to Cortes. That didn't work so then I sold my young CB, my only signing year 1, Salcedo. That didn't work either. So I panicked. Sold Ndoj. Didn't work. Spent weeks trying to send them on loans (Reinier and Cortes). No one wanted them. Some days before the season would begin I went mental. Purchased the in-game editor and shipped Cortes on loan to Parma and Reinier off to Cagliari. So my starting striker/s and/or AMC are now off somewhere else and I am playing my last year backup strikers (last year I even deemed one of them not good enough as my backup and just loaned him out) are now my first choice strikers. I had a budget of 300k left and couldn't find anyone better than Donnarumma and Ayé, who are competing for my striker position.

I am happy though that we survived our first year, ended up 12th. If Balotelli knew how to kick the ball and score from his 2-3 chances 1on1 each game, then I think we would have been more successful and maybe even landed around like 8th or something.

Started second season so and so. Played Crotone in Coppa, first game of the season. Won on PKs with my starting team! Got real scared about how the season turn out considering the team at my disposal (for example, I have no RB backup because I couldn't find one). We went on to lose against Milan at home. Fairly even game though, so that calmed me down. Travelled to Fiorentina where Vignato scored on his debut on over time (90+3) and it was so very much undeserved.

Next game (and last game) was against Napoli at home. Almost everyone ended up with a yellow. Niang ran from outside their box right through the middle and through everyone and scored 1-0 - amazing run where not one single Brescia player even tried to stop him. Occasionally someone rushed beside him for a few meters and then decided he was too pacy so they just started walking. Cred to my GK Joronen for trying to save the ball. Donnarumma then managed to score a wonderful volley in 76th minute and, of course, Vignato scored the final goal in 90+4th minute. Was it a fair result? Well I would argue - Kind of! We always have possession, but like any tiki-taka team we don't always create something from it or we try to pass our way to the finish line instead of just shooting within the PK area. In this game we had three half chances, somewhat possession (58%) and 14 shots (8 on goal). Enough to score a goal, at least. Napoli had 7 shots (4 on goal) but 1 half chance and 1 clear chance. But our shots came in more dangerous areas so I'd say we won somewhat fair and square.

One thing that is I am doing very much wrong in my tactic is that a lot of attacks end up passing up and down and sideways on our right flank just outside PK area. Now, I am ok with that happening every now and then my it's happening too much and it is asking my RB to take on 1on1. I've asked him not to do that because he'd even have a hard time dribble a cone, so he then passes it back to my MCR. He in turn passes it back, and so forth, until my RB is offside. Obviously it is a tactical issue, but do you have any suggestions?

I am still tossing it around so I am open to everything. didn't use to have a advanced playmaker but my plan was originally to play with Reinier in and AMC but I killed that off obviously. So now I playing Pardo in AP attack/support there. During the games I often also flick from positive to attack if I am going for goal, or to cautious if we're away against e.g. Milan. Since I fancy possession, I regularly change to lower tempo and even shorter passes. I have run at defense on because I am afraid we might be too static with our passing otherwise, but I am undecided.
OP
OP

starting to have a little bit more success here. it seems to me like part of the issue is this years edition is a bit more simplified to just plug and play.

what i mean by that is once you pick a preset formation you arent supposed to make a lot of changes or tactical instructions to it. the styles are meant to be played in the manner they alrzady exist without much change

so, not worth the money?
OP
OP

meh, there are certainly match engine issues but I haven't stopped playing it

Maybe if they patch/ fix the issues with finishing and wingbacks being a little too OP they match engine could be pretty good.

@Mark though i have, after much experimentation, found a workable tactic that seems to have mitigated some of these issues and without using Gegenpressen or copying someone else tactics.
Last edited: Nov 29, 2019 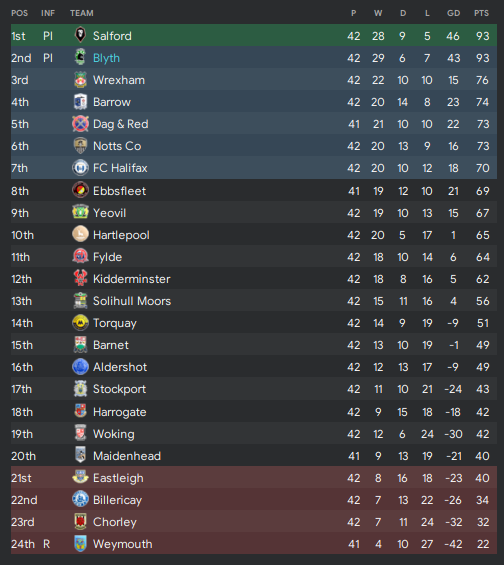 goal for woking, an injury, red-card for a guy that came off the bench, another injury when i made 3 subs 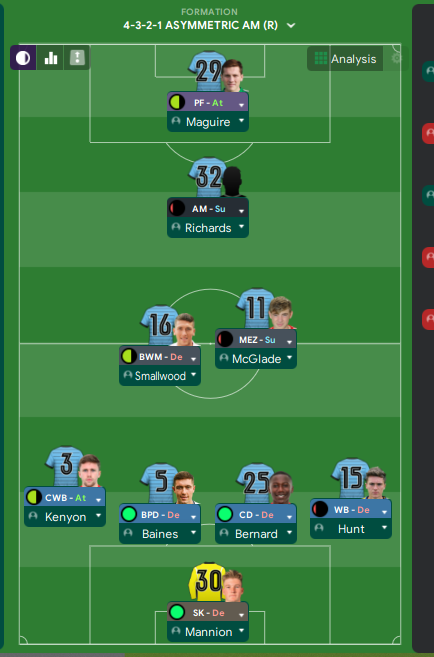 used to this shit 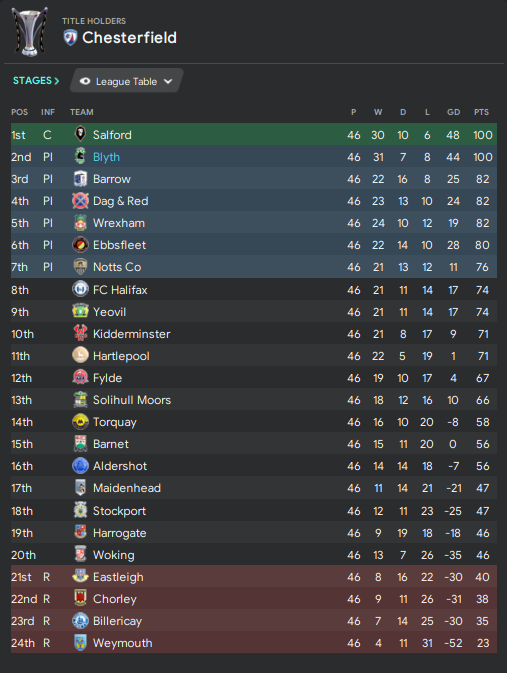 and a defeat in the playoffs to complete the shitstorm 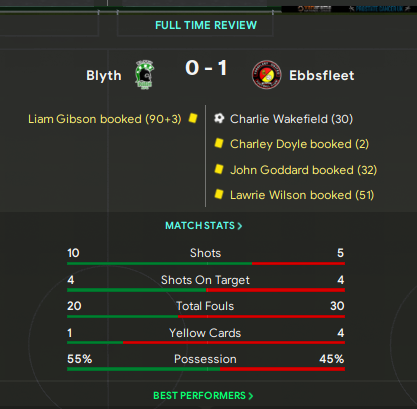 i hope the board will increase my WB because it's not funny anymore, 12.5k is just plain shit for this level

Had some injuries along the way, Roberts, who nailed last season, torn his ACL in december and missed the rest of the season

Overachieved thanks to loanees, but they will be gone soon. The next mercato is super important.

Do they get a bonus check for each foul?

those numbers are insane since the latest update

one ME update can fix that

Since the full release it has been a joke.
OP
OP

Despite my earlier complaining, I am actually having a decent time with this setup. Seems silly but my strikers seem to be missing fewer guilt edged chances, one on ones etc. Not sure why a tactical change would effect that but it has 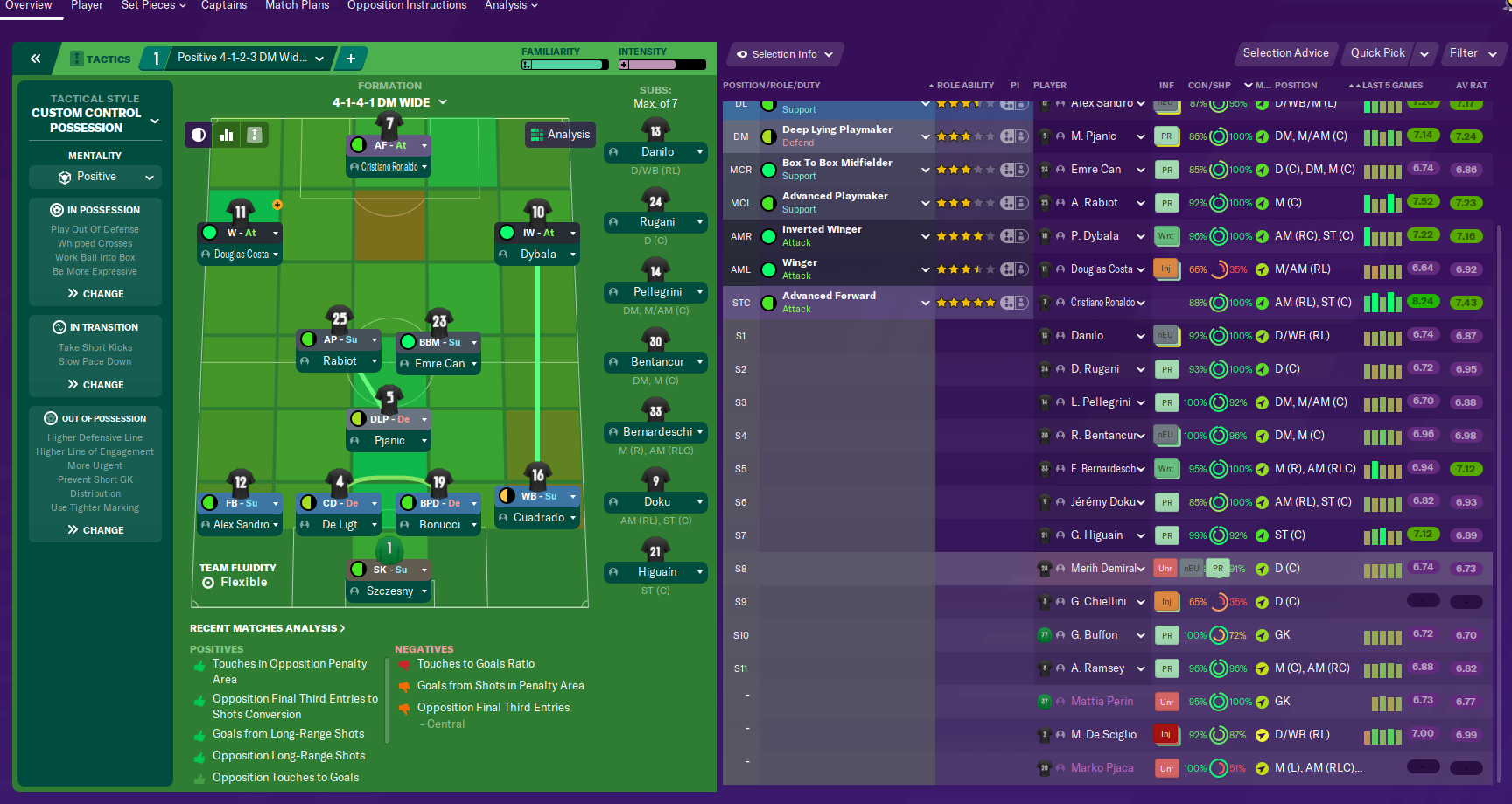 Looks like there have been enough complaints. SI made a post on their forum, finally, acknowledging the match engine has major issues and are working to patch ASAP.

I don't get it, it's nothing new, it's always been like this. But... is it random or is it actually people who function like this?

I go looking for X, let's say I want a new physio. I find one out of contract and interested in coming, he has 20 in physio... but he's not a physio, he's a data analyst and not even partially physio. If he's partially you can "convince" with money but otherwise...

So in this scenario, I assume there is a 29 year old retired WC physio who has changed his career path to being a really poor data analyst? I don't get it. There are so many of these.

I am a world class physio. One day I decided to be a sub-par moderator on an internet forum.
OP
OP

Finally created tactics that seem to work really well and even mitigate some of the ME issues. I am scoring goals from open play now that arent just deflections