That's why strip clubs are available. Golf might be relaxing but skanks in tight outfits outdo golf anyday of the week. Plus i can claim back on my taxes with the invoices.
OP
OP

The draw for the morning fourballs:

I'd expect Europe to win the second and fourth matches.

Other two are tough to call.
OP
OP

Farewell to the great Severiano Ballesteros, who died this morning aged 54.

The man was a genius. He could see and execute shots no-one else could and he made European golf what it is today.

I'm just glad I got to see him play when he was still healthy and could still play a bit. 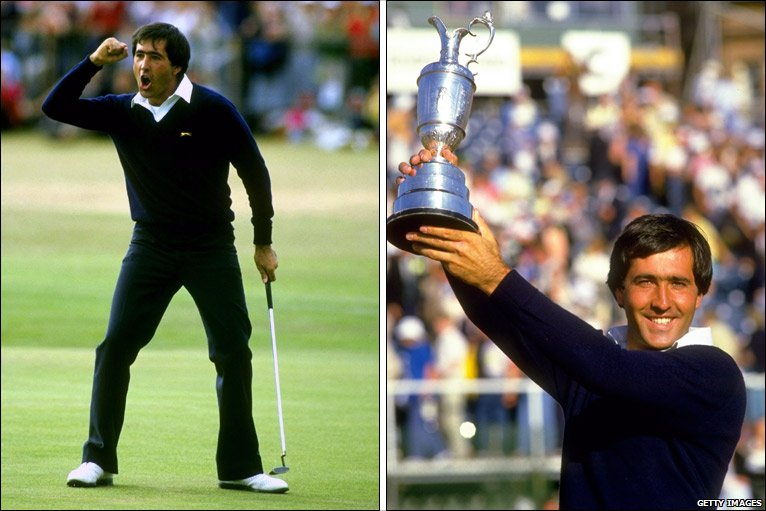 So, anyone else going to be paying attention to the Ryder Cup this weekend?

Pairings have just been announced for tomorrow morning's foursome:

The last match is the one that an awful lot of people wanted to see.

I'll definitely be following this weekend

Yeah, Mickelson's remark was rather amusing.

Meant to be pretty windy tomorrow, so probably won't be a day with zillions of birdies winning holes.

Are you going?
OP
OP

Think it'd be really hard to see much golf.

It's hard enough work when you go to the Open where there is play on every hole on the course.

But when there are only four groups on the course at any given time over the first two days, it'll be vitually impossible to see much.

Have you played there before or is Gleneagles a private club?
OP
OP

Anyone can go and play if they are willing to pay. Easier to get a tee-time if you are staying at the hotel., though.

I played the King's course a couple of years ago, which is the original course but is now considered too short for the pros to play.

The course they are playing on this week is a relatively new layout and basically designed specifically for the Ryder Cup.

The whole Gleneagles estate is a ridiculously nice place to hang around.
OP
OP

Interesting enough first day, even if the standard of play was fairly underwhelming.

The play from many players in the foursomes was pathetic - I don't think Watson and Simpson managed a birdie between them - aside from a couple of decent pairs. Though one could argue that even those decent performances came when playing against shit, so the pressure wasn't really on.

The standard improved a bit in the afternoon, but an awful lot of the good play was recovery shots, rather than good, controlled golf setting up birdie chances.

Normally these things basically come down to being a putting contest.

On the basis of today's play, this Ryder Cup could be decided by who manages to actually get tee shots on the fairway to give themselves a solid basis to attack a hole.

The lack of accuracy of the tee was the most striking aspect of today's play - and it extended to players who are known for their driving ability.

The rough is too thick and wet to score from.

There isn't even an excuse for missing so many fairways. By professional standards, this is not a course with narrow fairways. There are some holes where they get very narrow, but that only tends to be to make the longest hitters in the field think twice about smashing the ball as far as they can. If these guys consistently hit it 290 yards of the tee, they'd find pretty generous landing areas.

Both captains have made some pretty dodgy calls on pairings (McGinley playing Poulter-Gallagher in the morning and Watson not playing Reed-Spieth in the afternoon) that will be brought up and held against them if their team ends up losing.

People actually watching this "sport" is a testament to the prevalent boredom in the west. We have it too good and we're passing time by watching something that equals to people chucking ticktaks into a garbage can.
OP
OP

Every sport seems pointless if you simplify it enough.

Anyway, much higher standard of play in the fourballs today.

Unfortunately, Europe had a good day, so this thing is practically done already.

picked up this bad boy today

was hitting quite a few dead straight 260 yarders (along with some dud 100 yarders) in the simulator, i'll see how accurate that is IRL soon

Not sure where @Red is but welcome @ZoSo

picked up this bad boy today

was hitting quite a few dead straight 260 yarders (along with some dud 100 yarders) in the simulator, i'll see how accurate that is IRL soon
Click to expand...
Bunker play's mostly about confidence because once you learn that you need to hit pretty hard it becomes quite easy.

But getting to the point of being confident enough to hit hard (and not think you'll accidently hit a 15 yard shot 80 yards) is tough.

Had a few nice Callaway woods over the years.

Dru said:
Not sure where @Red is but welcome @ZoSo


Sent from my iPhone using Tapatalk
Click to expand...
i've been playing about 2-3 times a week and i've already improved a decent amount. been thinking about lessons

Red said:
Bunker play's mostly about confidence because once you learn that you need to hit pretty hard it becomes quite easy.

But getting to the point of being confident enough to hit hard (and not think you'll accidently hit a 15 yard shot 80 yards) is tough.

Had a few nice Callaway woods over the years.
Click to expand...
I tried a few shots where I hit it harder, I managed to get it out of the bunker but I hit too hard and it went too far, bounced at the edge of the green and rolled into the bunker on the other side

I guess there's a fine line of hitting it hard and not too hard?