Osman said:
Why was it renewed? Because he deserved a raise and new contract despite their being several years left on his contract?


I know its said often, but this coming summer is the time he finally leaves most likely. Expect a mini rejuvenation for the midfield, and a starter to be added. Will make it crowded for him and Mautidi (who's contact expires in summer).
Click to expand...
@Turk_Bianconero why would Marotta give Khedira a new and increased contract when there was no benefit to the club?

Quetzalcoatl said:
@Turk_Bianconero why would Marotta give Khedira a new and increased contract when there was no benefit to the club?
Click to expand...

Khedira, Can and Matuidi out. All of a sudden, the future of our midfield looks brighter and the wage bill is lighter.

Quetzalcoatl said:
@Turk_Bianconero why would Marotta give Khedira a new and increased contract when there was no benefit to the club?
Click to expand...
in a normal country, that would have been the question he should answer in front of judges.

So we are 3rd now with Ronaldo...what happens when he leaves and the wage bill is cut 30m? Do we buy 30m in wages worth of players cuz we can afford it or not cuz anyone we buy won't make that up in merchandising sales, etc?

The CR7 effect: Juventus on the world podium of the rich; the numbers

29 December at 10:35
The Cristiano Ronaldo effect. The arrival of CR7 has changed the world of Juventus, allowing the Bianconeri to become in all respects a global club with international thinking. This can be seen from the results of the Global Sports Salaries Survey 2019 prepared by Sporting intelligence (via calciomercato.com), a research on the levels of salaries and popularity of various clubs and leagues in the world.

A relevant figure relating to salaries emerges as follows: Juve is the third club in the world, considering all sports: 9.4 million euros on average, numbers that - as mentioned - project the club on the podium of the wealthies only behind Barcelona and Real Madrid and in front of all NBA franchises and empires such as PSG.

Just a year ago, Agnelli's club was in ninth place. The reason for the jump? The arrival of five high-salary players: Buffon, De Ligt, Ramsey, Rabiot and Higuain. The second Italian team is Roma, which does not exceed an average of 4.2 million euros. A large and evident gap.

This is also confirmed on social media. Juventus is the first team in Italy with almost 81 million followers in total between Instagram, Twitter and Facebook. In second place there is Milan with less than half of that (38 million). 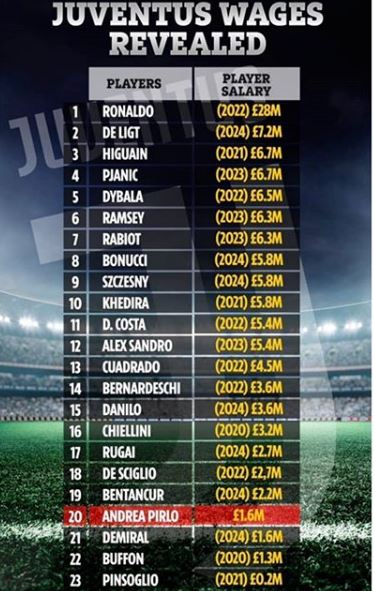 Pinsoglio, how do you survive bro

zizinho said:
Pinsoglio, how do you survive bro
Click to expand...
Hes making less than an average business graduate makes in his first year out of college here

Sent from my SM-N950W using Tapatalk

Nzoric said:
Hes making less than an average business graduate makes in his first year out of college here

Funny that captain Chiellini is only the 16th highest earner.
And our better players, Bentancur and Demiral, are near the bottom.
The poor coach is above poverty line.

Click to expand...
would love to see a comparison with Bayern's.
edit see this on the net, not sure how reliable it is:

Click to expand...
juventus4life said:
would love to see a comparison with Bayern's.
edit see this on the net, not sure how reliable it is:

https://www.sportekz.com/football/bayern-munich-players-salaries/amp/
Click to expand...
Is it gross or net for Juventus players wage? And how about Bayern?

Its ridiculous that we giving De Sciglio, Rugani that kind of salary. We made our own problem. Even we increase Bonucci wages last year after we bought it for a year.

Can't wait the day Princess fucks off with his salary. It's gonna be two long years before that dream comes true. 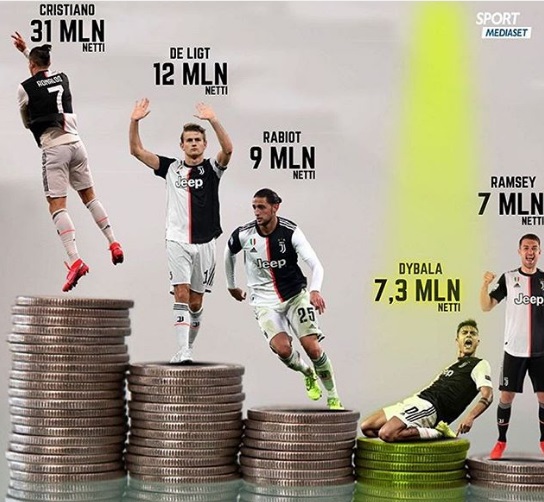 Users Who Are Viewing This Thread (Users: 1, Guests: 2)