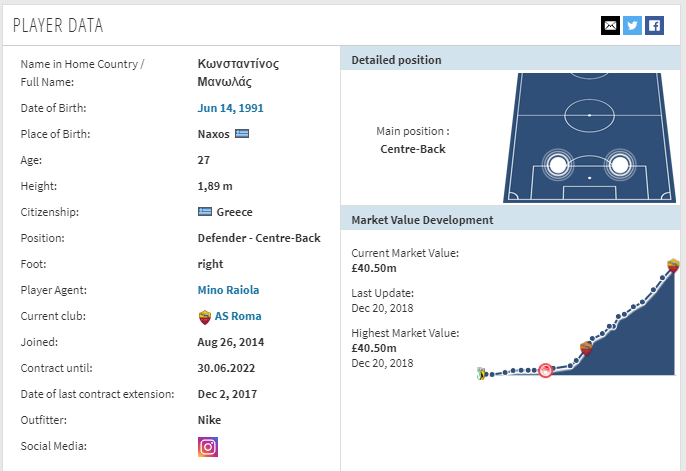 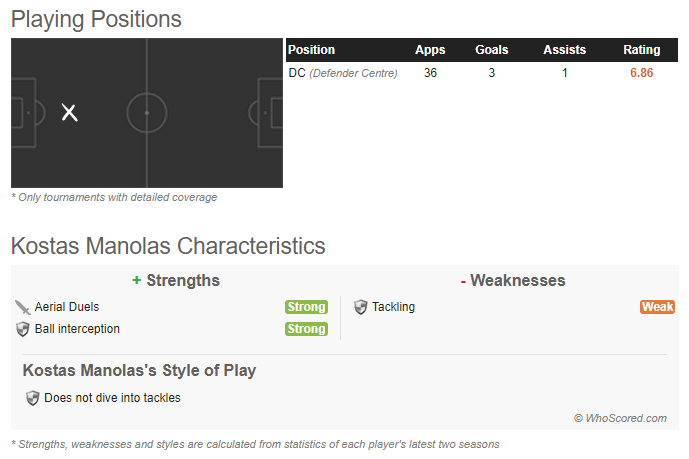 Where are we finding these players this time around?

Click to expand...
Shoulda been a G with me. I woulda recruited you.

And based on reports, we're going to spend 10-12mil over this one too? You gotta be fvckin kiddin

This marotta guy is suckin us dry with these kind of sh!t benchwarmer deals.

I can't believe that we really want Manolas.
As i am a Greek, i've seen a lot of his games and i can judge his development as a footballer. He started as a big prospect with AEK, then as a traitor he went to Olympiakos and in his first year he became a starter. It's true that year after year he is more good than he was and he deserved to be a starter for NT in this WC, where he made excellent matches.
For his characteristics. He is really fast, perhaps one of the most faster CB in Europe and i mean it. That his basic characteristic. With his speed he can cover his mistakes and the motion of his opponents. He is average as ball playing CB, with moderate long-short passing. He can't get the ball and go forward or passing like Bonucci.
The worse with him is the fact that he is really a mistake prone. I can remember a lot of fails and unbelievable mistakes by him. Sometimes, he lacks on decisions, sometimes he seems like the worst ball-playing CB and sometimes he is so bad that every time, it smells like a goal. You can't trust him and in a team like Juventus some mistakes are paid. If someone blame Bonucci for his mistakes, then he will hate Manolas.
Generally, he has some good potential but his level is not for a team like Juventus. I don't think that he is limited or something like this, but is not good enough for this class. He needs experience in a top level league with a team where he will take some chances to prove himself. Juventus will not give him this chance and that would be a disaster for his career and for us who will pay around 10m for him.

I liked what I saw from him in the Champions League and World Cup.

What a joke. Marotta continues to spend money on bench players while we're still lacking a single am/winger? What a surprise.

The whole thing isn't going in the right direction, definitely.

Well our bench is going to be on par with our first team soon so if we don't buy 2-3 first team players next Summer I.E 2 Wingers and a Barzagli replacement then i'll be extremely pissed off.

If he does come, you can be pretty certain that one of our defenders is on the way out. Most likely Ogbonna, because Atletico are interested.

I can see Ogbonna out for a nice sum of cash, and Nastasic in on a loan.

not an upgrade on anyone we have...waste of time. Hummels is the only defender I would have wanted who was available.

donpiero said:
And based on reports, we're going to spend 10-12mil over this one too? You gotta be fvckin kiddin

This marotta guy is suckin us dry with these kind of sh!t benchwarmer deals.
Click to expand...
this deal has ogbonna v2.0 written all over it

There must be something special that they're seeing, since by every account, he's decent at best.

Marotta looking to pull off another Barzagli-esque move

I guess he is young for a CB so there's plenty of room for improvement, and even a retard should improve when he goes from the Greek league to playing at Juve.

Pirlo's Beard said:
I guess he is young for a CB so there's plenty of room for improvement, and even a retard should improve when he goes from the Greek league to playing at Juve.
Click to expand...
What?


Also, the point is that he won't play much at JUve, at least not at this point of his career when he's making costly mistakes quite regularly (I'm basing this entirely on the post of GrecoJuve for the sake of this argument), so he won't improve much on his decision making and concentration, which seems to be the problem and needs regular play time to solve.

That reported 10-12 million is crazy!