Please don't leave. I love this guy's versatility and heart. He's such a likable player, and he is always clutch in CL games.

AlexJuventino trying hard for most hated member, 1st with the username and then with the players he hates

Like was already stated must wait to see how Sarri uses him, but my feeling is it won't be enough to keep Cuads happy. If Cancelo stays no way Cuads ahead of him and MDS is backup for defense at RB. Plenty of options in MF that Cuads might not be needed so might only see time as RF but finishing isn't Cuads strongest suit.

zizinho said:
AlexJuventino trying hard for most hated member, 1st with the username and then with the players he hates
Click to expand...
One does not simply compete with me.

We could play Cuadrado as a goalkeeper too - I mean - We all love him, so he will certainly perform!

Cuadrado has a great personality as far as I can see, unluckily that isnt enough for him to stay. Cover multiple positions?

Aren't these the same experts that were laughing at me when I said he should be played as an attacking RB? Then Max played him there. Well, at least, we all know now how much they understood.

Cuad lost his pace and that's the end of the road for him here. He doesn't have the strength to bully faster wingers, nevermind CFs. If he bulks up he could become a tolerable RB, but he is 31 with 1(?) year on his contract.

15M in the bank and a great salary for him plus a chance to impress and get an extension. I don't know who hates him , but those that want him to stay certainly don't love him.

last year and 4m net wages he won't have space without attack so why not?
We'll miss the man not the player imo

It's not even a question. Most probably there is no offer though.

So he is on 4m at the moment

Last time i checked on gazzetta at the beginning of the season, he was at 3.5M iirc. But dont mind the extension, well deserved raise

damn, wish i could miss a year of work and get a raise

DAiDEViL said:
I keep saying this, but folks too dense to understand that a player covering for the RB, RWB, RCM, RM and RW positon is worth keeping. The €15m we would get for him would do nothing for us and we'd have lost our most polyvalent back up player...and might have to replace him. Good luck finding a back up as good for that kind of money. Just keep him if he want's to stay.
Click to expand...
Whilst a valid point, you need to also weigh those pro’s up against the fact he can barely seem stay fit anymore.

As with many fans I love the guy and would be happy if he stayed. Wouldn’t be devastated to lose him though if we can retain the rest of our current full backs and wingers.

Bianconero81 said:
Please don't leave. I love this guy's versatility and heart. He's such a likable player, and he is always clutch in CL games.
Click to expand...
He missed a sitter that would have finished the bayern game and we went out.

Zlatan said:
He missed a sitter that would have finished the bayern game and we went out.
Click to expand...

Would love to see him as a RB experiment instead of Mds. Cuad could be much better than him if done right.

As a winger or wingback? Then no. Sell.

The few games he played RB he was shaky. Not Sturaro bad, but not good either, definitely much more suspect than Cancelo

Cuadrado used to play wing back at Fiorentina and he managed to dominate the whole wing on his own.

He's capable of playing right back but he's not used to be disciplined in defense in terms of positioning and marking simply because he's attacking minded so that's always a risk when you play against a strong opposition. 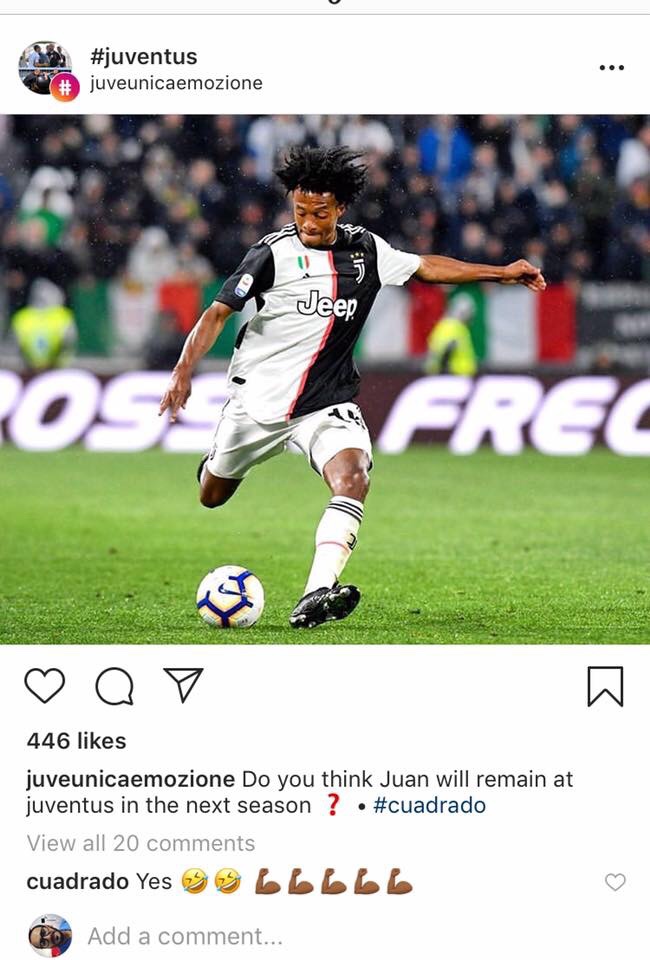