I suggest you get laid.

As soon as humanly possible. It will take your mind off of this crusade of yours

Sent from my SM-A800F using Tapatalk

Zizinho being an incessant pest I see.

Buon Compleanno. Wish I had seen him play live rather than watch highlight reels on YouTube.

Happy Birthday legend! Main reason I became a Juve fan after seeing him in 94 WC in US.

Roberto Baggio spent his 50th birthday with victims of the earthquake in Amatrice. “It was my best birthday, the one most full of meaning.”

The Divine Ponytail kept the visit a secret from the media until he and his family arrived this morning in the 'town’ made up of tents for those left homeless by the disaster in August 2016.

He spent the day with the locals, dining with residents and volunteers, then playing with the children who have been left with no roof over their heads.

“It was my best birthday and certainly the one most full of meaning,” Baggio told TMW Radio.

“I am very happy and hope they are too. This tragedy would affect anyone and watching it on television doesn’t reflect what you see when you come here and view it with your own eyes.

“My hope is that young people can accept this challenge to seek value in their lives. Everyone has to deal with difficulties in life, but it all depends on your attitude when these things happen.

“I hope people accept the challenge and face it down to emerge victorious. Norcia and Amatrice are perfect examples in the way they dealt with this tragedy.

“The inhabitants of these cities are humble and live for the simple things. I will take so much with me from these days spent here, meeting such admirable people.”

Baggio: The People's Champion
While Italian football is so often dominated by petty partisanship, Roberto Baggio rose above the fray. Susy Campanale salutes the Divine Ponytail on his 50th birthday.

The one good thing about getting old is that you can brag about seeing the greats in their heyday. Ah you young whippersnappers won’t fully grasp what it was like to see a star at his peak. It’s more than brief fuzzy YouTube clips or those new-fangled gifs they’ve got nowadays. Roberto Baggio was poetry in motion.

Baggio – somewhat appropriately for a Buddhist – transcended Italian football’s petty partisanship. I genuinely cannot think of another player
who so united all fans in the Peninsula, no matter their club allegiance. He wore the shirts of bitter rivals, Juventus and Fiorentina, Inter and Milan, but nobody ever held it against him. How many others can genuinely say their sale sparked rioting in the streets? This was no ordinary passion that Baggio invoked in people.

He formed an emotional bond with Fiorentina that could not be broken even when he joined their fiercest rivals, Juventus. He endeared himself forever to them by refusing to take a penalty against the Viola, showing there was still some purple blood coursing through his heart even under that hated black and white jersey.

It pains me to think that so many people around the world remember Baggio only for his haircut or that missed spot-kick in the 1994 World Cup Final. There’s your YouTube generation again, seeing only clips of days gone by and thinking they know everything about a player because they’ve got Football Manager running in the background. They forget Baggio dragged Italy kicking and screaming to that Final after a disastrous start. That Arrigo Sacchi visibly didn’t want to play him, but someone of such talent simply could not be ignored and shoved his way into the line-up anyway. His injury in the semi-final and having to play the 120-minute Final in scorching heat on essentially one leg before stepping up for that penalty – all cut out of that tidy clip.

In terms of pure, raw talent, I’m not sure Italy has ever had anyone to match Baggio, nor will we see his like again. It’s amazing to think that he achieved all of this with crippling injuries, one of which nearly ended his career before it began at Vicenza. What could he have been without those problems? Spoken in the same breath as Diego Armando Maradona and Pele, no doubt.

Baggio was an artist of the ball, someone who could enact a move before anyone else had even thought to consider it yet. His running style always reminded me of a ballet dancer, tip-toeing past defenders with his feet barely seeming to touch the ground.

He was also born in the wrong era. In the 1990s, Sacchi and his protégés were effectively cancelling the trequartista from the calcio lexicon, wanting only those who ran hard and followed precise tactical patterns. Baggio needed the freedom to express himself, to dance around the field to his own symphony. Carlo Ancelotti famously told Parma not to sign him when a deal had already been done – something the Coach now at Bayern Munich admits was a massive mistake – but that’s how so many Coaches saw him at the time, as an inconvenient rebel.

The people love nothing more than a rebel, of course, and that endeared him to us even more. Baggio could not be tamed, he had to run free and we’d relish every moment of his dance. He had to go where he’d be allowed to express himself, at small clubs like Bologna and Brescia, who still knew how to appreciate artistry.

His CV doesn’t look that impressive on paper: a UEFA Cup, two Serie A titles and a Coppa Italia. He won the Ballon d’Or only once, in 1993, and some would have you think this made him less than a legend. Trust those of us who saw him play for the full 90 minutes – he was always that good.

Today, Roberto Baggio turns 50. The curls are now white, the ponytail gone, but the glint in those sparkling green eyes remains. Il Divin Codino was the most apt nickname you could find, as watching him play made you feel closer to the Heavens. 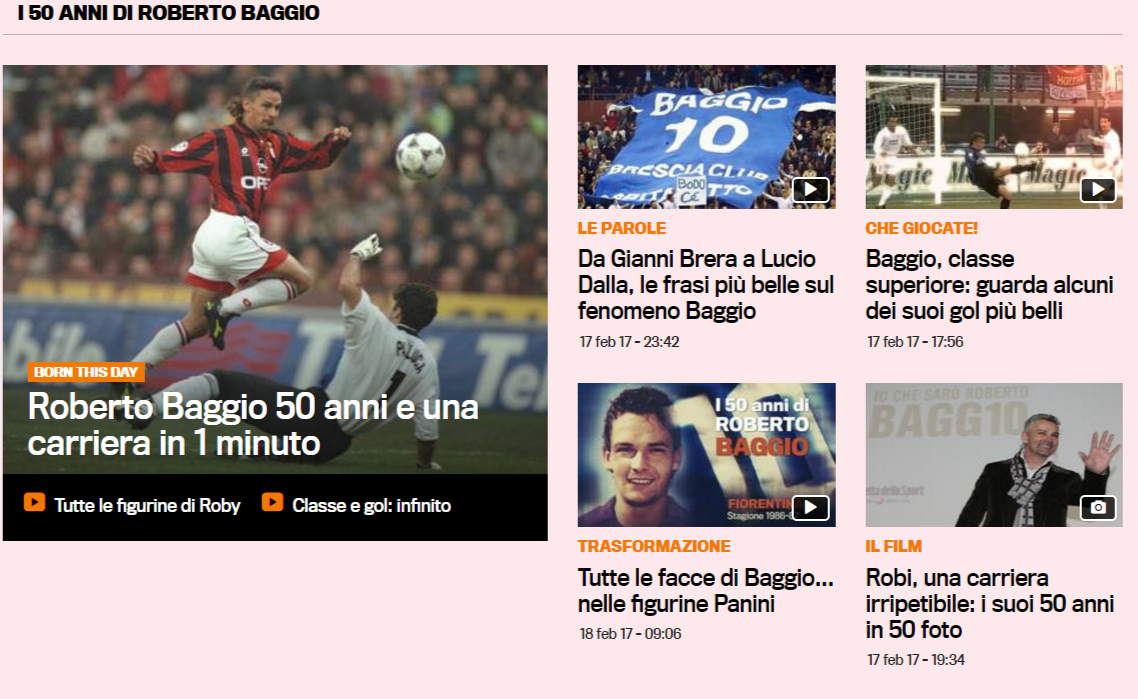 Good old GdS.
Click to expand...
Am I missing something? What's wrong with it?

King of Kings said:
Am I missing something? What's wrong with it?
Click to expand...
They put him with every team he played with EXCEPT Juve

Judging by the photos

Hustini said:
They put him with every team he played with EXCEPT Juve

Judging by the photos
Click to expand...
Well of course it makes sense to not include any photos of him playing for the club where he had the most success and win a Ballon D'or

Right? I mean, that's how it works, I suppose

King of Kings said:
Am I missing something? What's wrong with it?
Click to expand...
Hustini said:
They put him with every team he played with EXCEPT Juve

Judging by the photos
Click to expand...
well who would have thought that Hustini would have got it?

Mark said:
well who would have thought that Hustini would have got it?
Click to expand...
For what it's worth, they don't show Venezia or Bologna either.

King of Kings said:
For what it's worth, they don't show Venezia or Bologna either.
Click to expand...
sure but come on...

you think Baggio and see Juve and the Azzurri. These hacks put the biggest pic of him in a meelan shirt. :

Mark said:
well who would have thought that Hustini would have got it?
Click to expand...
Bruh

How are the best 2 mods of tuZ nation?

I wish I could tell you.

What's your take on Allegri with the recent issues?


In his thread of course

Hustini said:
They put him with every team he played with EXCEPT Juve

Does this shit really work for them?