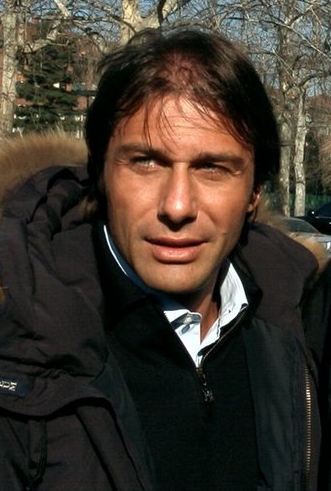 Antonio Conte (born July 31, 1969 in Lecce) is an Italian former football (soccer) player turned manager, who will serve as head coach of Siena in the 2010–11 Serie B season.

Player
Conte began to play football in this city, within the U.S. Lecce youth team, before making his Serie A debut with the first squad in 1985. He was signed by Juventus in 1992, being later made captain before the promotion of Alessandro Del Piero to this role. During the 1998–1999 season when Del Piero suffered a horrendous leg injury, Conte returned to the captaincy and led Juventus to the UEFA Champions League semifinals. He maintained the captaincy till the 2001/02 season.
In 2002–2003, Conte was part of the Juventus team that reached the UEFA Champions League final only to lose on penalties to AC Milan, with Conte himself coming closest to winning the game for Juventus in normal time when he crashed a header off the crossbar early in the second half.
Conte became one of the most decorated and influential players of Juventus F.C. history.
He played for the Italian national team and was a participant at the 1994 FIFA World Cup and the 2000 UEFA European Championship.

Coach
After having retired as a footballer, Conte worked as an assistant manager for Siena alongside Luigi De Canio in the 2005–06 season.
In July 2006 he was appointed coach of Serie B side Arezzo; however, after a series of disappointing results, he was sacked on October 31, 2006. On March 13, 2007 he was reinstated to the Arezzo head coaching position, as his predecessor failed to gain any significant improvement. In his second time at Arezzo he led the team to five consecutive wins in a row, and 19 points in 7 matches, which allowed the Tuscan side to fill the gap from the last safe spot; his team however did not manage to avoid relegation, and Arezzo dropped into Serie C1 on the final matchday, only one point behind Spezia.

On December 27, 2007 he was appointed by Bari to replace Giuseppe Materazzi for the second half of their Serie B 2007–08 campaign. He has since done very well, turning Bari's 2007–08 season around from relegation-threatened to a comfortable midtable position. In the following season, 2008–09, Bari were crowned Serie B champions, being promoted to Serie A for the 2009–10 season. On June 2009, after weeks of rumours linking Conte to the vacant managerial role at Juventus, he agreed in principle for a contract extension to keep him at Bari for the new season; however, on June 23 Bari announced to have rescinded the contract with Antonio Conte by mutual consent. After Claudio Ranieri was sacked of Juventus, Conte was appointed by the club as one of the candidates to become the new coach. However, the "bianconeri" hired Ciro Ferrara as the first team manager, instead. Conte has stated that he would like to be the Juventus coach in the future, because he thinks he is ready to assume that work. On September 21, 2009 Atalanta appointed him to replace Angelo Gregucci.

After a good start at the helm of the orobici, Atalanta under Conte's reign began struggling in result from November, leading to protest from local supporters and troubles between Conte himself and the organized ultras of the club. On January 6, 2010, Conte was repeatedly contested by Atalanta fans during a home game against Napoli, ended in a 0–2 loss for the nerazzurri; the matchday ended with a police intervention to avoid confrontation between Conte and the Atalanta ultras.The next day, Conte tended his resignations to the club, leaving them in 19th place.
On May 23, 2010 he was announced as new head coach of Siena, with the aim to bring the Tuscan side back to the top flight after relegation to the 2010–11 Serie B. Conte successfully led Siena to promotion for the 2011-12 Serie A season.

To be official on Monday.


Hopefully I jinx the move with this thread.

I hope you do
OP

Too bad, it happened, he's ours
OP

I have a good feeling about Conte. Still, one of the worst picks.

I dont like you as our coach,loved you as a player.

Good luck. I hope you prove me wrong.
OP

Dule90 said:
I think Del Neri is staying but I'll go with the optimistic road and chose another one.

My pick is Conte.
Click to expand...
First one to vote for him

I'm really happy he will be our coach.

I will accept -reps on this account at the end of the season. Thank you

Wahdan said:
I'm really happy he will be our coach.

I will accept -reps on this account at the end of the season. Thank you
Click to expand...
I will make sure i remember that

I have a good feeling. Except for Deschamps and Villas Boas there was really not that many coaches out there anyway. Hopefully he still remembers what Juve is all about and hopefully by his leadership he can teach the rest.

JCK said:
I wish him the best of luck, hopefully he'll be a successful coach as he was a successful player.
Click to expand...
ditto.

JCK said:
I wish him the best of luck, hopefully he'll be a successful coach as he was a successful player.
Click to expand...

There's nothing else we can do.

I feel he'll do well

Worst of all available. Pathetic decision.