we need a CB, Pat

Watch him cost us CL tie if he rejoins.

Also we are covered at LB.
Sandro
Spinazzola
Caceres
Cancelo

All can play LB. 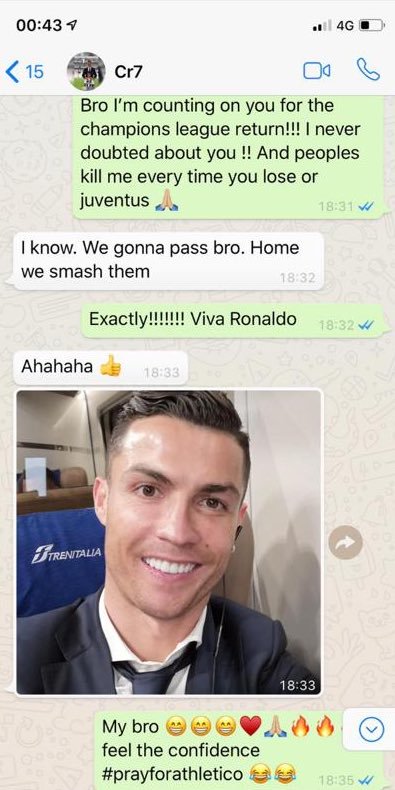 I love how Ronaldo send him a selfie too

Badass Dybala said:
I can't tell whether I hate Evra for being such a glory hunter or if he's a comedy genius
Click to expand...

Badass Dybala said:
I can't tell whether I hate Evra for being such a glory hunter or if he's a comedy genius
Click to expand...
Imo cautious sympathy is the proper approach when judging the mentally ill

He's still going at it

Agree with his first observation, 2nd one, not so much. He's a Union legend though, what do you expect.

DAiDEViL said:
Agree with his first observation, 2nd one, not so much. He's a Union legend though, what do you expect.
Click to expand...
Did you follow his rift with PSG? I hate the club but Evra is being classless and clownish. Imagine ADP acting like this

Cerval said:
Did you follow his rift with PSG? I hate the club but Evra is being classless and clownish. Imagine ADP acting like this
Click to expand...
What rift? Has he ever had something to do with them in the first place? He's a clown, let him say whatever he want's, no one is taking him serious anyway.

DAiDEViL said:
What rift? Has he ever had something to do with them in the first place? He's a clown, let him say whatever he want's, no one is taking him serious anyway.
Click to expand...
He definitely has mental issues

"Before the 1st leg, I made a motivational video for the United players. Then I had PSG fans saying 'What is this ****** doing', 'You need to get behind French clubs in Europe', 'You forgot to take your anti-depressants?', etc. Then PSG win the match 2-0, and massive respect to the PSG away fans in that game. After the match I posted a picture with me lifting the CL."

"3 weeks ago I made a post on Instagram telling PSG fans to watch out for the remontada, since you are big experts on that topic. PSG fans were telling me that I was such a moron, and that United aren't anywhere near as good as Barça was. BAF! I was in visionary mode!"

"French press thinks I'm an enemy of the state for rooting against PSG. Yellow jacket protests? My fault. PSG's elimination? My fault. The French press is too focused on my celebrations, but I don't care."

"For the kids born after the iPhone X that can't understand the greatness of my career, I will do a little summary... but the haters will probably keep lying about me to the new generations. For you to decide if it's a shit career....

"You're in the presidential box at Parc-des-Princes, how dare you celebrate like that in front of the PSG fans? Go celebrate like that in the United dressing room. Respect the people at the stadium, don't jump with joy and disrespect the people who pay to go to these games. Paul Pogba? No problem, he's a United player so he can celebrate. But you Patrice? He's my friend, been a while since I talked to him, but fucking hell, you cannot do that!"

"I was told Jérôme said some nasty things about me. I didn't believe it but then I was shown the video. You son of a leaky condom...oops, sorry Mr. Rothen. I really like your father too, look at what you made me do. You really are mad, aren't you my little blonde? Your reward, next time I see you, I'm going to slap you in the face. These aren't empty threats, you know we'll see each other eventually. We ate from the same plate, we played together. I had to dribble everyone, even the goalie, so that you could cross the ball back when we played together, and now you talk like this? Not you...you forget so soon. You were always a salty prick. I remember when L'Equipe gave you a rating of 5 and our other teammates got 7, since you were so paranoid of the ratings, you would call the journalist and ask "Why did you give me a 7??!?" Piece of sh...I will stay polite. Stop telling bullshit, stop telling lies. Be careful, because we will cross roads eventually. I'm sure we will."

(
Jérôme Rothen was a BTEC Beckham and also Evra's best friend in Monaco. He also became the godfather of Evra's daughter.

He's a pundit in RMC since 3 years and defended Evra and Pogba a lot ( Evra is hated in France like a lot of great players like Cantona, Ribery, Ginola, Benzema and even Henry at some point...) because he was Evra's friend and Pogba is like a little brother to Evra.

But since 1 year their relationship became sour and after the game, Rothen (ex player, pundit and PSG supporter ) talked badly about Evra behaviour...he started to say " the other guy" which is weird because of their past friendship and said that his mom didn't educate him well, you can't make a video like that in a stadium and questionned why he was there. He isn't a PSG legend nor a Manchester United legend like Cantona.

He said that the security should have threw him out. He also said that Evra became a clown with his " I love this game " and that he utilize his instagram account to make money.
)

I don't see the problem here