Click to expand...
Good competition between Douglas and Ramsey in the injuries department

Click to expand...
add sandro and rabiot with 2 minor injuries each, pjanic missed a game after an international break, higgy also had some minor shit, and cr also sit out some games, who knows exactly why.

with other words, besides our keepers, it's only de ligt, bonbon, demiral, can, berna, cuadrado and dybala who has not missed a match through injury so far this season. 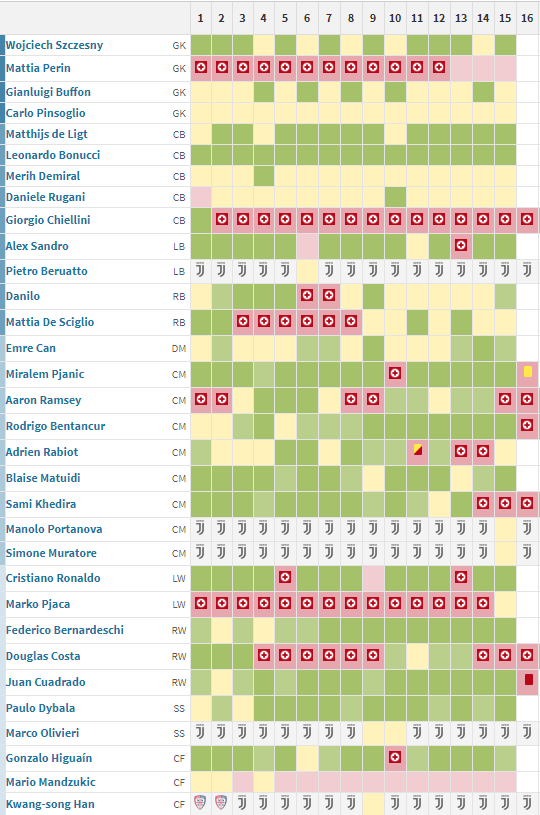 Costa is back in full training. Hope he lasts longer this time.

Click to expand...
I was going to make a joke suggesting that last part is destined to happen when you have BBC behind you all the time... but... the BBC is no longer.

Juve: Trio back for Udinese
By Football Italia staff

Juventus trio Matthijs de Ligt, Douglas Costa and Rodrigo Bentancur are available to face Udinese after resuming full training.
The Bianconeri face Udinese at the Allianz Stadium on Sunday, and the club reports the aforementioned three trained regularly with the rest of the squad this afternoon.
Bentancur picked up a knock in the 3-1 defeat to Lazio last weekend, whilst Costa has been out injured for much of the season.
On the other hand, Aaron Ramsey is working away from the group, following a personalised training regime.
The Welshman has struggled to stay fit since joining the Old Lady in the summer, starting only five games in all competitions.

s4tch said:
add sandro and rabiot with 2 minor injuries each, pjanic missed a game after an international break, higgy also had some minor shit, and cr also sit out some games, who knows exactly why.

with other words, besides our keepers, it's only de ligt, bonbon, demiral, can, berna, cuadrado and dybala who has not missed a match through injury so far this season.

Hustini said:
This is awesome. Link?
Click to expand...
it's from transfermarkt, under squad -> absences:
https://www.transfermarkt.com/juventus-turin/ausfallzeiten/verein/506

not 100% accurate though. there's nothing on matuidi's injury.
OP
OP

not 100% accurate though. there's nothing on matuidi's injury.
Click to expand...
lol still more accurate than my guess. thank you

Juventus ended 2019 in the league in the best way: beating Sampdoria and gaining the mathematical certainty of finishing the year at the top of the ranking. But the labors are not over: there is a Super Cup to play, in a few days, in Riyadh.

That is why the group, which returned from Genoa last night, met this morning at the Continassa. Unloading for those who played yesterday, possession of the ball and practice match for the rest of the group: this is the menu of the day for the bianconeri, who will train in the morning tomorrow, to leave, in the early afternoon, for Riad, where Sunday is played against Lazio .

It should be noted that Szczesny carried out personalized activity between the gym and the field, while Alex Sandro underwent a physiotherapy session.

Sandro and Tek are back in time for Lazio [VS]

So, whats the situation for Cagliari? Who do we have out?

Juve_fanatic said:
So, whats the situation for Cagliari? Who do we have out?
Click to expand...
chiello + khedira injured, bentancur suspended
OP
OP


Giorgio Chiellini is poised to return to the Juventus squad but Daniele Rugani’s future remains in doubt.
The Bianconeri capatain has missed the entirety of the season to date through injury, allowing Matthijs De Ligt and Merih Demiral to play in his place.
Goal Italia now report that Chiellini is recovering well and should return to the Juventus squad for February, in time for Juve’s Champions League games against Lyon.
This may have a knock-on impact on Daniele Rugani’s future, given the youngster has featured in just a handful of games.
Leicester City remain interested in the player and Goal suggest that they have already made an offer of around €20m but it remains to be seen if Juve will accept.

Don't rush it. Give it some more time. We don't need him against Lyon. No offense @Raphaël
OP
OP

De Sciglio was on the bench for Juve’s 2-1 win against Roma last night, but didn’t play in the game.

Now the official Juve website reports that the former Milan player underwent tests at the J Medical Centre to examine the extent of a suspected thigh injury.

The website states that De Sciglio hasn’t suffered any muscle injuries, but has sustained an ‘elongation of the large adductor muscle of the left thigh’.

He will now be monitored day by day.

De Sciglio has made only six appearances in Serie A for the Old Lady this season.

Demiral season over with torn ACL

Juventus defender Merih Demiral has been ruled out for the rest of the season after rupturing the anterior cruciate ligament with additional meniscus damage.

The Turkey international had scored the opening goal in last night’s 2-1 Serie A victory over Roma at the Stadio Olimpico.

He then landed heavily after jumping for a header and limped off the field.

Taken in for tests at the J-Medical Centre this morning, doctors confirmed Demiral has ruptured the anterior cruciate ligament in his left knee, with additional meniscus damage.

This will require surgery and usually rules players out for at least six months, which effectively ends not only Demiral’s season, but also his chances of playing at Euro 2020 for Turkey, in the same group as Italy.

Those two teams are due to meet at the Stadio Olimpico in June.

It’s an identical injury to the one sustained by Roma midfielder Nicolò Zaniolo during the same match and he too is out for six months, pending today’s operation.

Demiral had recently pushed Matthijs de Ligt out of the starting line-up at Juventus, with reports of offers up to €50m rejected from Arsenal, Manchester City and Leicester City.

james95 said:
Ronaldo has an injury?
Click to expand...
it isn't a status update, more of a seasonal recap
OP
OP

Users Who Are Viewing This Thread (Users: 5, Guests: 5)