So here's the deal. I've been talking some shit about Linkin Park, which Lilianna didn't like, cuz it's her favorite band. So here's a chance for her to talk shit about mine... and if anyone wants to share their opinion (good or bad) about the band (Incubus) you're very welcome

So who's Incubus?
Incubus is an american band from California. The band was formed by the childhood friends Brandon Boyd (vocals), Mike Einziger (guitarist) and Jose Pasillas (drummer). Later on they brought in Alex Katunich (bass) also known as "Dirk Lance". In 1995 they decided to bring on a DJ as well. Gavin Koppel (DJ) joined and spiced things up.

After making it big in 1997 the relationship between DJ Gavin Koppel and the rest of the band fell apart. Gavin left the group and was replaced by the talented Chris Kilmore, who in my opinion can do alot more at the turntables.

This year Alex Katunich (bass) also decided to leave the group. There was no problems, he just had enough and wanted to try something new. So he was replaced by Ben Kenney, who left The Roots for Incubus. A big change in genre you could say... but it seems to be working out. 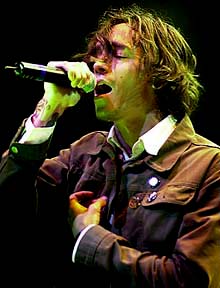 Mike Einziger, guitar
to the right

Music,
Some would call Incubus' music "Neu Metal" and those people should be turtured and shot. I have trouble putting them in a specific genre, cuz of their versatility. It's basicly rock music, but with so many twists and turns. Unlike many other bands, all their song differ in some way and I guess that's what make them truely great. Someone who doesn't know them should listen to lets say... "Are you in" and then "Idiot Box", and I would bet that the person wouldn't believe it's the same band.

Incubus released this "album" or should I say EP. It only contained 6 songs... basicly a warning of what's to come

The first real album was released. It had a really hard sound to it. Personally I like the later albums more, but there is some good tracks on this though.

Make Yourself, released in 99'

Probably their best album to date. A softer sound compared to S.C.I.E.N.C.E. but in no way to be considered a sell out. Incubus really demonstrated their versatility on this album. They made it "big" with songs like 'Stellar', 'Drive' and 'Pardon Me'.

Incubus picked up the tracks from 'Enjoy Incubus' and enhanced them, then released them again along with 4 new songs.

Another great album was released in 2001, and now Incubus really got big... going on world tour and such... I caught their act in Copenhagen and it was awesome! This album contains several hits such as 'Are you in', 'Warning', 'Wish You Were Here' and 'Nice To Know You'.

Upcoming album...
The new album is set to be released early next year. The title is still unknown, but what I do know is this.
The producer is Brendan O'Brien who has worked with bands like Pearl Jam, Rage Againts The Machine, Papa Roach and Train in the past, so it should work out fine.

11 songs is done and there should be 6 or 7 more to go. I've heard bootlegs of 'Megalomaniac' and 'Pistola' and they're both great, so I'm exited. :extatic:

Mike (guitarist) has described the new album like this: "Like the old shit, but older. It's very different. It's very energetic and fast, and a lot of it is more technical, I guess maybe in the vein of more of our older songs...they don't sound like our older songs, but they are more, uh, Exploratory." That sounds great!!! And by listening to the two tracks I mentioned before, his description sounds about right.

Damn, this post is getting long... better stop now.

So that's my favorite band. Do you like 'em, hate 'em or what??? Tell me what you think of them.

Bloody hell, you really are a fan of their work, aren't you? Impressive post!

I'm not familiar with any of their songs, I'm afraid. Might try some but your description doesn't really sound like something I would enjoy listening to.

Yes I am. IMO this is the only good band around these days. Ok, that's a bit harsh, but you can't beat their versatility. I can spend hours listening to these dudes without getting tired of them.

You should try listening to some, they might just grow on you... but if you're not into rock in general, maybe it's a good idea to stay away.

++ [ originally posted by Kaliman ] ++
Yes I am. IMO this is the only good band around these days. Ok, that's a bit harsh, but you can't beat their versatility. I can spend hours listening to these dudes without getting tired of them.

You should try listening to some, they might just grow on you... but if you're not into rock in general, maybe it's a good idea to stay away.
Click to expand...
Can't hurt to try. Will visit my fav record shop later this week, will give 'em a listen and let you know!
OP

ok... then look for "Make Yourself" or "Morning View". I don't think the others would be something for you.

Will try those!
OP

Will try those!
Click to expand...
I've got the impression you like pop, dance, 80's... so the other albums would be way to hard... I could be wrong though...

I'm into RHCP and I despise pop. Am I getting closer to having a chance of liking them?
OP

++ [ originally posted by Matto ] ++
I'm into RHCP and I despise pop. Am I getting closer to having a chance of liking them?
Click to expand...
RHCP eh?
I know a few RHCP fans, and they all dig Incubus... maybe this is the band you've been looking for

BTW, I like RHCP too... I been listening to them since the late 80's

++ [ originally posted by Kaliman ] ++
RHCP eh?
I know a few RHCP fans, and they all dig Incubus... maybe this is band you've been looking for

And you like RHCP too? But ... but ... that would mean we have something in common! :dazed:
OP

And you like RHCP too? But ... but ... that would mean we have something in common! :dazed:
Click to expand...
alright that does it! I'm calling the doctor!

are you in is my favourite song by them, i really liked the morning view sessions dvd, brandon boyd is one of the five sexiest men ive ever seen, i still gotta listen to some of their stuff because ive only listened to make yourself, morning view and some other songs. pardon me and drive are awesome tracks too. i like brandon's drawings.
OP

The Morning View sessions is very cool indeed, can't believe I left that out :doh:

Don't know about the sexy part But he's a great singer that's for sure.

Pardon Me song and video is great. My avatar is actually from that video.

Yes, he does draw some good shit, as well as Jose. Talking about drawings, did you see the 'Drive' video... amazing stuff :thumb:

yes! when i found out they two did that video i was amazed! i also heard brandon did the morning view cd "cover" that has like two fish... did he?

the pardon me video is pretty cool! they have awesome videos, except for the wish you were here video that i found kinda boring..

stellar is a song by them that almost everyone i know loves.. but i kinda dont like it. it has a cool video though
OP

++ [ originally posted by fabiana-juve ] ++
i also heard brandon did the morning view cd "cover" that has like two fish... did he?
Click to expand...
If you've seen any drawings related to Incubus, they were probably done by either Brandon or Jose...

But the Morning View session cover looks like this...

i know! i mean the drawing the CD itself has...

btw, you made me listen to incubus! the song circles is awesome
OP

oh... now I know what you're thinking of... the actual cd :doh: yes that's with the fishes... you'll find them at their website as well... http://www.enjoyincubus.com

Erik, you can listen to small bits of their tracks if you visit their website , and go to the media page.

the first song i heard by them is pardon me, i think