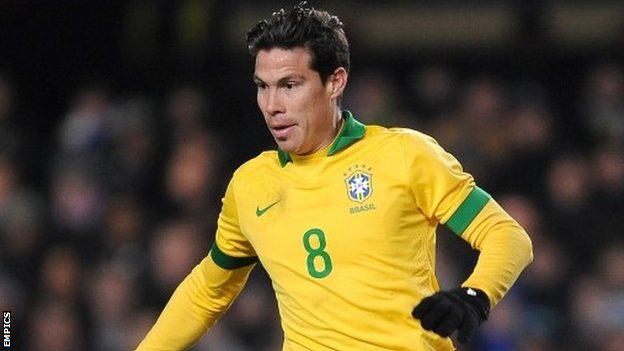 Born in Recife, Hernanes is a product of the São Paulo academy and played for them for 9 years (2001–2010). He was loaned out to Santo André for the 2006 season. In 2008, as a São Paulo player, Hernanes won the Prêmio Craque do Brasileirão's best player award. In January 2009, Hernanes was listed as the most promising football player in the world by the British newspaper, The Times.[4]

On 31 January 2014, Hernanes joined Internazionale, completing a permanent switch from Lazio by signing a four-and-a-half-year contract that runs until 30 June 2018.

Hernanes can cover all midfield positions. He is well known for his technique as well as being neat and tidy in possession, with the ability to accurately pass the ball out wide in order to stretch play.[21] His double step is one of the most popular in the world and he also is an accurate and powerful striker of the ball.[22][23]

He has been compared to Andrea Pirlo and Kakà.

Welcome. Please do not disappoint us

DeviAngel said:
Yeah I just saw that and I can't edit it ...
Click to expand...
Then burn it to the ground please
Merda of all clubs

At least change the picture with a Brazil one.

Click to expand...
Looking at this you'd think we just signed some sort of upgraded Hames Rodriguez
OP
OP

@x can you please change current club and the picture

It'll be funny trying to offload him in the coming windows.

Who made those comparisons?

Maddy said:
It'll be funny trying to offload him in the coming windows.
Click to expand...
Nope, he will revive his career like Pirlo with us.

Always rated him. Boy he's gonna be disappointed when he sees that our shirt doesn't have a collar to prop up

Who made those comparisons?