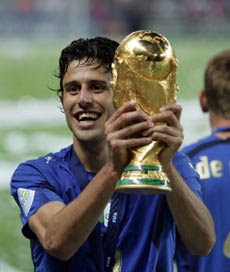 Fabio Grosso, (born 28 November 1977 in Rome) is an Italian World Cup-winning footballer who currently plays for French Ligue 1 club Olympique Lyonnais and the Italian national team. He is remembered around the world for scoring the dramatic late winner against Germany in the 2006 World Cup semi-final and scoring the winning penalty in the shootout that won the trophy against France.


Fabio Grosso was born in Rome yet hails from Chieti in Abruzzo, where his family soon returned. After a number of seasons with Renato Curi Angolana, an amateur team of the Abruzzo Eccellenza division, Grosso debuted at professional level with Calcio Chieti of Serie C2. At the time, he was an attacking midfielder, and scored 17 goals in 68 appearances. He then joined Perugia of Serie A in 2001, and was first capped for Italy in 2003. At Perugia, he was transformed into a left back by coach Serse Cosmi. Grosso signed for Palmero in January 2004, when the Sicilian team was still playing in Serie B.

Grosso is a left wing back or left back, who can play also in the role of left wing. He is also a free kick and corner specialist.

Grosso joined Internazionale for a fee reported of €5.5 million on 6 June 2006. On 8 July 2007, Grosso officially signed a four year deal with French team Olympique Lyonnais after passing a medical and agreeing personal terms. He was given the number 11 shirt. On 31 August in the last hours of transfer market he signed for Juventus. Deal worth around 3 million €.

Grosso was a member of the victorious Italian 2006 World Cup team. In the same tournament against Australia, Grosso was awarded a controversial penalty in stoppage time. The penalty was converted by Francesco Totti, and consequently knocked Australia out of the World Cup. On the 4th of July 2006, he scored the first goal against Germany in the 119th minute with a curling right into the top corner from the edge of the box and famously ran around and screamed "I don't believe it!" as his teammates celebrated. During the final on 9 July 2006, he scored the winning penalty against France, giving Italy their fourth World Cup.

We're waiting for fax with the signature.

Click to expand...
I will edit when it comes offical.


That didn't even feel remotely good. I just wanted to see how the other half lived.
OP
OP


That didn't even feel remotely good. I just wanted to see how the other half lived.
Click to expand...

Eventhough it's been debated for weeks, I'm certain that Football Italia will use the words "sensational" and "swoop" in whatever article they publish on this.

They better write "fabulous" in it too.

some pics of Grosso

molinaro must be upset.
OP
OP