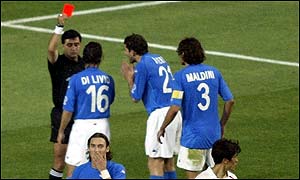 i know a lot of u wud kill me for this , but i just had to tell. i saw an interview on him yesterday...


even after more than a year, he still pledges his innocence. he sed he didnt favour the koreans and had no regrets on his refereeing during world cup 2002. it was a split second desicion and that he did the right thing, made the right calls according to what he saw (disallowed goal, penalty and totti). if given the opportunity to do it again, he wudnt change anything. he knows that fans of italian football had/have been critisizing him and he sed "the italians had nobody but themselves to blame for the defeat coz they missed clear cut chances to score". even the narrator sed "the italians keep on blaming everybody but themselves".

haha! this is my new favourite thread

Do I remember Byron Moreno? If he's that ugly, sleepy-eyed, incompetent, ignorant, retarded excuse for a referee that knocked Italy out of the 2002 WC, then yes, I remember him.

I hope he dies a NASTY death.

so where's the lad now?
did he get in to the politics? didn't he run for some elections (and got suspended for life from refereeing in course of events)?

And did he star in that Italian movie? Story is an Italian director was looking for an actor to star a mafia boss, and he asked Byron Moreno. Since he was the most hated person in Italy he would have been perfect for the role

My father almost smashed the television during the Korea - Italy game. No kidding... he had a bottle of beer which he flung but it hit the framework of the TV and missed the screen by a whisker.

I don't blame him. Making an honest error in judgement is one thing; disallowing 3 totally legit goals another.

How can a man live with himself after screwing a whole nation over ? Its not just about football; its about your ethics. That man is to Football what Saddam iss to World Politics.

Immoral son of a b*tch. I have tried long and hard to forget about the incident but i can't.

It was Fifa's mistake in the first place. There is a rule which states that no referee from the countries in the same group can officiate matches within that group. Since Moreno was from Ecuador, he shouldn't have been refereeing that game.

Why should Italy blame themselves ? Its hard enough to scre 1 goal in any major tournament and they managed to score 4 ! 3 of which were disallowed.

I hope he rots in hell.

I hope the Italians kill him. How the guy could live with himself is beyond me, he should have killed himself.

With three words (or maybe four) I'll express how I feel bout him:
I FVCKIN HATE HIM.

he's not in the refereeing world nymore, he was sacked after a "mistake" he made in a match in ecuador. what happened was there was this big match between two teams, and the injury time should be only 3 minutes IIRC but moreno went on the let the game play for another EIGHT minutes, and the opponent scored 2 goals while the other one was leading before it.

I don't think I explained it well but whatever it is the jerk got sacked.

I swear I've never cried that much in my life when Italy lost to Korea. Bastard. I'll NEVER forgive him for this.

++ [ originally posted by sallyinzaghi ] ++
RIH Moreno
(people mostly say RIP but thanks to IceBlu I'll use RIH- rot in hell )
Click to expand...
LOL @sally....i guess what u sed just sums it up....we f**cking hate him!

i think he's an excellent coach. he should be awarded for his bravery and honesty under such pressure.

Roll your eyes all you want ... thats how strongly i feel against him and i stand by it.

WHERE IS GRAY?? lol

i hope someone nails him to the ceiling and cuts fine strips of his skin while filling him up with gasoline through his mouth. and have his family watch him explode

++ [ originally posted by [LAC] ] ++
i hope someone nails him to the ceiling and cuts fine strips of his skin while filling him up with gasoline through his mouth. and have his family watch him explode
Click to expand...
hang him upside down and staple his back with two big heavy-duty staple-gun. watch him bleed. once the scars are big enough, pour turpentine on his wounds

When he ruled a penelty to korea after just six minutes I knew it was all going to hell. Just look on that man's face when he does that = EVIL :fero:

your taking it too far guys,personally i think hes a human being that did a mistake or two,there is no human thats perfect,so why all that?

he's a normal referee and i think that him and the narrater are right about the italians blaming noone but themselfs.