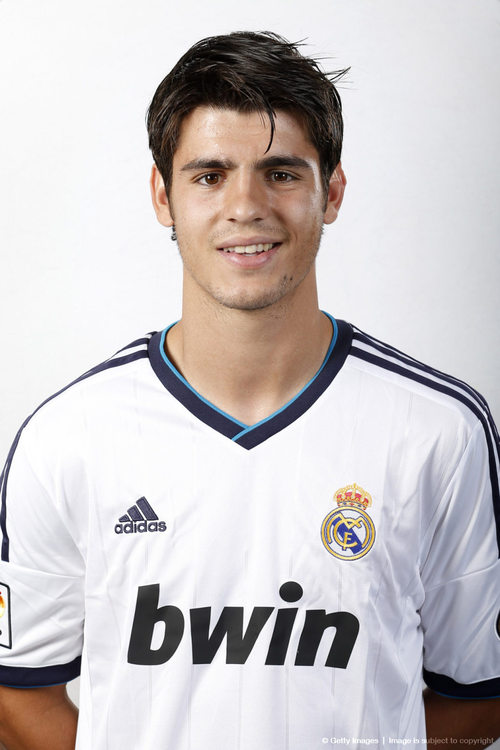 Born in Madrid, Morata signed for local and national giants Real Madrid in 2008 from neighbouring Getafe CF, finishing his formation two years later but starting appearing for Real Madrid C still as a junior.[1] In July 2010, after a successful season with the Juvenil A where he won two youth titles and scored 34 goals, he was promoted to Real Madrid Castilla; later that month, first team coach José Mourinho took the player alongside four teammates to a preseason tour in United States.

On 15 August 2010, Morata made his debut with Castilla in a friendly match with AD Alcorcón, scoring the only goal of the game. His third division debut came on the 29th in a 3–2 win against Coruxo FC, and he netted his first official goal in a 1–1 draw against RSD Alcalá, on 31 October.

On 12 December 2010, Morata made his debut for the first team, when he was brought on as a substitute for Ángel di María in the 88th minute of a 3–1 La Liga win at Real Zaragoza. Ten days later, he made his debut in the Copa del Rey, also coming from the bench in the last minutes. In January 2011, after Gonzalo Higuaín's injury, Spanish media appointed him to be his replacement in the main squad. However, Mourinho discarded this option saying that "he's not prepared to be in the starting lineup of Real Madrid. He needs to grow up and finish his formation with Castilla"; in this period of time Morata scored five goals in four matches with the reserves, while Emmanuel Adebayor was being signed to fit the missing striker in the first team.

On 13 February 2011, Morata scored the first hat-trick of his career, in a 7–1 victory against Deportivo de La Coruña B. He finished his first season as a senior with 14 league goals (squad best alongside Joselu), but Castilla failed to gain promotion in the playoffs.

Morata scored his first official goal with Real's main squad on 11 November 2012, entering the field in the 83rd minute of an away fixture against Levante UD and netting the 2–1 winner after just 60 seconds. In his first-ever official start, at home against Rayo Vallecano on 17 February of the following year, he scored the opener after just three minutes, but was removed from the pitch before the half-hour mark to make room for Raúl Albiol after Sergio Ramos was sent off (2–0 home success). On 2 March 2013, Morata played the full 90 minutes in El Clásico against FC Barcelona, providing the assist as Karim Benzema scored the opener in an eventual 2–1 home win. He also had a couple of chances to net himself during the match.

In the 2013–14 season, Morata became a regular member of the first team squad under new coach Carlo Ancelotti. On 18 March 2014 he scored his first goal in the UEFA Champions League, closing the scoreline in a 3–1 win over FC Schalke 04 at the Santiago Bernabéu Stadium for the round-of-16. On 17 May, in the last game of the season, he scored two late goals against RCD Espanyol to end the season with eight league goals.
International career

Morata was called by the Spanish under-17 team for the 2009 FIFA World Cup in Nigeria, playing four matches and scoring two goals for the third-placed team. Subsequently, he represented the under-19s at the Japan International Tournament, helping the national team finish second after the hosts.

Morata was selected by Spain to the squad that appeared in the 2011 UEFA European Under-19 Championship in Romania, helping the national team win the tournament with six goals, the highest in the competition. He made his debut with the under-21s at the 2013 European Championships in Israel, being essential in the first two group games against Russia and Germany by netting the solitary goal in each contest, respectively in the 82nd and 86th minutes; he closed out a perfect group stage for both team and player with his third, against the Netherlands (3–0)– eventually he was crowned the competition's top scorer, and it also ended in conquest.

Fuck u mark i created a thread for him

Cheesio said:
Fuck u mark i created a thread for him

Hope you do well for us, but not too well

please don't be another turd striker

Two Spaniards in one day. Does that bring our tally to 7 spanish speaking players well Morena probably wont be sticking around

Fint said:
Hope you do well for us, but not too well
Click to expand...
Hopefully he does fantastic for us and then refuses to return to Madrid if they pay the clause

i hope he is very average in his 1st 2 seasons with a couple of important goals in the process. then he explodes ih his 3rd season and becomes one of the best CFs in the world

Onwards and upwards. Young and full of promise, hoping he comes good!

zizinho said:
i hope he is very average in his 1st 2 seasons with a couple of important goals in the process. then he explodes ih his 3rd season and becomes one of the best CFs in the world

$#@! you Real
Click to expand...
Thank you madrid, then fuck you madrid

not even Hustini changing his avatar, username, signature and posting 1000 posts in this thread can ruin it now. too late for that