* Available subtitles: English, Spanish, French, Portuguese
* Available Audio Tracks: English (Dolby Digital 2.0 Stereo), French (Dolby Digital 2.0), Spanish (Dolby Digital 2.0)
* Commentary by Larry David and Jerry Seinfeld on The Stake Out, The Deal, The Pen, and The Pez Dispenser
* Commentary by Jason Alexander, Julia Louis-Dreyfus, and Michael Richards on The Revenge, The Busboy, The Subway, and The Boyfriend parts 1 and 2
* Commentary by writer Larry Charles on The Heart Attack The Baby Shower, The Library, and The Limo
* Commentary by director-producer Tom Cherones and production designer Tom Azzari on The Parking Garage and The Parking Space
* 41 episodes from the first three seasons on eight discs: The Seinfeld Chronicles (pilot), The Robbery, The Stake Out, Male Unbonding, The Stock Tip, The Ex-Girlfriend, The Pony Remark, The Jacket, The Phone Message, The Apartment, The Statue, The Revenge, The Heart Attack, The Deal, The Baby Shower, The Chinese Restaurant, The Busboy, The Note, The Truth, The Pen, The Dog, The Library, The Parking Garage, The Cafe, The Tape, The Nose Job, The Stranded, The Alternate Side, The Red Dot, The Subway, The Pez Dispenser, The Suicide, The Fix-Up, The Boyfriend (1), The Boyfriend (2), The Limo, The Good Samaritan, The Letter, The Parking Space, The Keys
* Featuring the original (1-2 minutes longer) NBC network versions of each episode
* Two versions of the pilot episode
* Remastered in high definition
* Inside Looks: Interviews with the cast and creators about what was happening behind the scenes as the episodes were created and filmed
* In the Vault: Saved from the cutting room floor... deleted scenes - never seen!
* Not That There's Anything Wrong with That: Never-before-seen-outtakes and bloopers
* Master of His Domain: See Jerry in exclusive stand-up comedy footage, shot for the show but never used
* Sponsored by Vandelay Industries: Original NBC promotional ads and trailers
* Notes About Nothing: Trivia tracks with behind-the-scenes scoop and production notes
* How It Began: An hour-long look at how Jerry Seinfeld and Larry David first came up with the idea for the show, how it almost didn't get made and how they emerged with the show that changed the face of television forever
* Tonight Show footage
* Kramer vs. Kramer: Kenny to Cosmo: meet the real Kramer... Kenny Kramer!
* Exclusive to the gift set:
* Limited-edition original script with handwritten notes from Larry David
* Exclusive "Monk's Diner" salt & pepper shakers
* Collectible playing cards
* Number of discs: 8 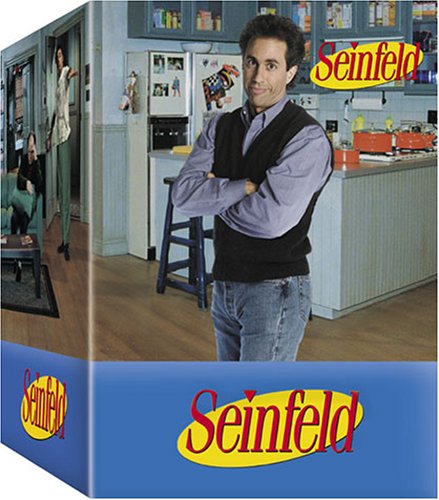 the price is 78$ at amazon.com it worths :thumb:

Yeah, I got it and its great.

thats a must have

Oh, praise the Lord. I LOVE SEINFELD. This tops my Christmas List, no question.

++ [ originally posted by Andy ] ++
Oh, praise the Lord. I LOVE SEINFELD. This tops my Christmas List, no question.


Bes, you are a very bad man, very verrry bad man.
Click to expand...
take'em away

U mean u bought it?I tought it will be out @ nov23
Click to expand...
I think its been out about 2 month or so ago.

U mean u bought it?I tought it will be out @ nov23
Click to expand...
It was out November 1st in London.

I think it's been out for a while here too, so that region limitation thing doesn't look to be true

I would buy this in a heart-beat if I had a DVD player. :down:
OP

Finally I bought this last week,but copies not original. the original is 160$