Their youth teams have been better than ours for years. 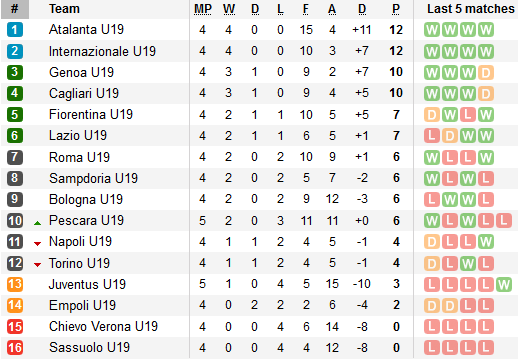 geez I thought they looked better at the start of the season than the other years.

Mark said:
geez I thought they looked better at the start of the season than the other years.

Usual suspects up there, but we are badly underachieving in the league.

fifth win on the trot across competitions 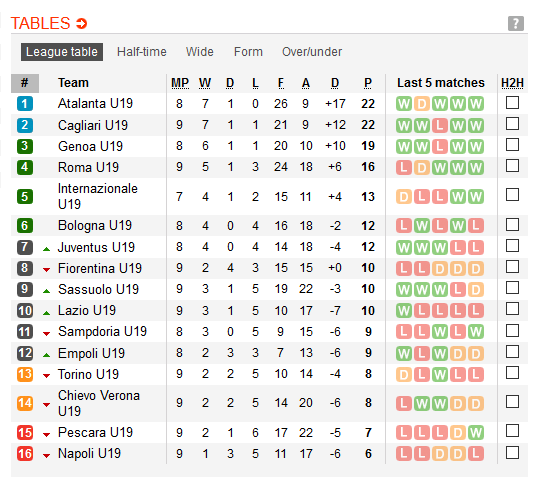 Nice, we usually suck in these tournaments.

Sassuolo vs Juventus U16: Juventus have three players sent off in the space of a minute including the keeper & a Juve outfield player is forced to go in goal. Sassuolo then score with the final kick of the game to make it 3-3.

Remembers me of Real vs. Juve and Buffon vs. Oliver?

They're so dramatic and whiny, just shut the fuck up and play.

Is primavera in session or they canceled it like women's (a very Italian decision)?

They cancelled all youth football around when first major cases were reported in Italy in late february I think. Because of the early big spreads were some calcio youth league.
OP
OP

Cancelled a couple of days ago, all youth football. AFAIK they didn't give any final positions.

Juve U23 (Lega Pro) also cancelled, gone straight to final positions and play-offs to be played.

The Primavera started terribly this season but they went on a run of 9-5-2 before the season was suspended, including a win against Atalanta and draws with Cagliari and Inter. Finishing behind Atalanta, Cagliari and Inter is no shame because they always have very strong youth teams, but the team was coming together nicely. They finished 4th.

Moreover, Juve comfortably won their UEFA Youth League group (Atlético, Leverkusen, Lokomotiv) and were facing Real Madrid in the RO16 - this has been delayed until August, same as senior UEFA competitions.

Also, the U17 team were absolutely DESTROYING their division before the shutdown: 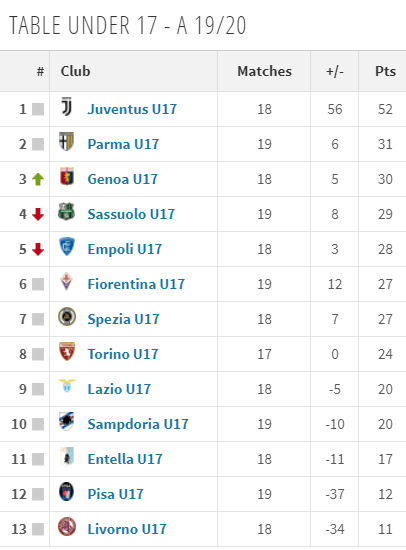 They won all but one game, a draw with Parma. +56 GD is all that needs to be said.

I was speaking with @U Picciriddu about this the other day - there are a few potentially special players in that group;

Fabio Miretti - new Italian golden boy, plays AM but gets likened to Marchisio, even though he scores a lot more
Ervin Omic - we've mentioned him before, Austrian CM/AM. impressed when he played but picked up some injuries
Angel Chibozo - Beninese inverted left winger, explosive and strong on the ball, unplayable in open field, a bit rough but exciting
Matias Soulé - personally haven't seen much but another 'next Messi', inverted RW, reminds me more of Robin van Persie

Hard to pick out an individual defender as they all look strong as a unit. The fullbacks do well, especially Turicchia, who is more of an attacking threat.

The giant Leonardo Cerri (almost 2 metres tall) more often starts as the CF. Physicality also makes a big difference at this level, that's for sure. He scores quite a few goals. And his alternative, Andrea Bonetti, who some people like more.

Valentino Salducco is the captain and definitely the maturity in midfield, nice left foot and technique, very modern midfielder who could play mezzala or trequartista with no problems.

Cerri​
This would be the strongest team on paper.

It's the best U17 team I've seen, at least for Juve. But it's all relative, as at U17 level and below heads drop easily and players can enjoy some dominant performances. We'll see how well this team does when they play at Primavera level.

Of the current Primavera players, I'd still go for Fagioli ahead of all the others, I have hopes for him and I believe the club do too. There are a few 8/10 players for this level who I like (Gozzi, Tongya, Ranocchia and others), but I'm not willing to say they can be established Serie A players. As we all know, even if they do it will probably be for other teams. If we could have 3 players in the first team from the 2001 - 2003 category it would be an amazing achievement, that's the reality at top clubs.

Ive tried to follow the U19 as much as possible. Missed some bad games at the start of the season, but afterwards they’ve been doing fine imo. Sometimes it’s a bit hard to follow as some players go back and forward to U23 (I don’t have enough free time to follow the U23 matches aswell) and I think that in general there are a lot of players available so often you’ll notice some changes in the line-up. Usually we start in a 4-3-1-2 or a 4-3-3 formation.

I think it’s a mature group, tactically we are pretty smart and strong and I didn’t notice a lot of positional mistakes. We lack a bit in terms of creativity.

I strongly agree on Fagioli. For some time I’ve been hoping to see him starting on the bench when the Juventus Facebook account posts the players available for the next match. Allegri was a fan of him, google it up and you’ll find some articles about Allegri talking about Fagioli. As far as I know he started as a attacker at younger age, after became a trequartista and this season they’ve been trying him out as a regista. He is very good on the ball, has nice passing skills and is good under pressure. Scored some nice goals aswell. Saw some matches where he couldn’t maintain a high level for 90 minutes, perhaps this is why we didn’t see him in the first squad yet.

Ranocchia and Ahamada are two players I like to mention. Both DM/B2B kinda players, I think they have a lot of potential.

Moreno I think is a bit hyped. If he didn’t came from Barcelona a lot of Juventini probably didn’t talked about him. He has to grow a lot before reaching the Serie A. Tongya usually plays as trequartista behind Moreno, perhaps he’ll do better as a 10.

Dragusin is very strong, Gozzi feels a bit stressed on the ball. Not so good under pressure yet.