5/5 amazing album, another masterpiece from Kanye and his team
Click to expand...
wasn't that great gimme some of that graduation, late registration or colkege dropout.

Calexico - Algiers is greatness, love the album, probably my favorite so far in 2012. The middle of the album is :lick:

5/5 amazing album, another masterpiece from Kanye and his team
Click to expand...
Yeah I like it even if most of it is bullshit rap, some of the beats are great. New God flow, creepers are both awesome. What you think @Aush

Salvo said:
Yeah I like it even if most of it is bullshit rap, some of the beats are great. New God flow, creepers are both awesome. What you think @Aush
Click to expand...
Absolutely... that's my team so I can't front tho lol

So what do we have coming up this year? The one's I'm looking forward to so far this year:

There's also pretty surely Eminem, Bon Jovi, The Strokes, Alice in Chains and Deep Purple albums coming up, and rumours about The Black Keys and Arctic Monkeys releasing something later this year.

Doubtful:
System of a Down
Rage Against The Machine

Yeah, also Pearl Jam, their last album Backspacer had some good tunes in it.

Yes, quite looking foward to it.

Sound: The first Soundgarden album in 16 years and what an album it is! A fitting follow up to "Down On The Upside", it's like Soundgarden never left us. From start to end, this album sounds distinctively Soundgarden yet fresh at the same time. The band members have maintained that "King Animal" will still sound like Soundgarden and well, they certainly weren't just saying it! Songs like "Taree" or "Eyelid's Mouth" would not be out of place on any of the previous albums (ok, maybe besides "Badmotorfinger" but that's a pretty unique album).

But not only does it sound like old Soundgarden, they are taking their music to new places. "Rowing" is a great track that sounds unlike anything they have done before. Even "Been Away Too Long" is quite unlike previous Soundgarden; having a more rock than grunge/alternative sound. If I have one thing to criticize, I think the mix could be a little more dynamic but I guess that was always going to be expected with a modern rock album. I'm sure it would sound much better on vinyl. I used the CD to review. If I had to use one word to sum up the sound of this album? Soundgarden. And don't say that's two words! // 9

Lyrics and Singing: Cornell still has it for sure. He may not be writing such aggressive lyrics like "Slaves And Bulldozers" anymore but his lyrics are still top notch. All the classic Cornell/Soundgarden lyrics are there, from the catchy simple choruses to the deep verses. And more importantly in my opinion, the vocal melodies are outstanding. "By Crooked Steps" and "Worse Dreams" are standouts of this for me. It's also quite interesting to hear some new topics that Cornell has never covered before in Soundgarden songs, such as parenting in "Bones Of Birds".

In terms of singing ability, obviously Cornell doesn't have that god-like, bone crushing voice of "Black Rain" or "Jesus Christ Pose" anymore but he's nearing on 50 years old and has been singing his out heart for the past 25-30 years so it would be wrong to expect those kind of vocals again. In parts, his vocals do sound a bit too 'thick' or strained but I can't really say that this detracts from the songs. Although, the album has many classic screams and long sustained notes. On this record, Cornell really shows that he is still one of the best vocalists/lyricists in active rock bands today. // 8

Impression: For me, I think this is the best new album I've heard all year. It is on a different level to the albums released by Testament, The Sword, The Offspring, Van Halen etc. This year and I would say it even blows AiC's "Black Gives Way To Blue" out of the water for a comeback album, though Alice in Chains has a large disadvantage in losing their lead singer (R.I.P. Layne).

This album really is a perfect follow up to "Down On The Upside" and wouldn't be out of place if it was released only 1-2 years after that. For me, the standout songs are "Worse Dreams" (probably my favourite so far), "By Crooked Steps", "Bones Of Birds", "Eyelid's Mouth", "Non-State Actor" and "Been Away Too Long".

I wouldn't go as far to say that this album can compare to "Badmotofinger" or "Superunknown", as those are ridiculously good albums that few bands can manage to make albums as good as. However, that does not take away from the fact that this is a great album that is better than 99% of rock put out today or the fact that this album is indeed a Soundgarden classic already. If you like/love Soundgarden and have the teensiest tiniest bit of an open mind to accept the modern-ish sound, you should love this album. // 9 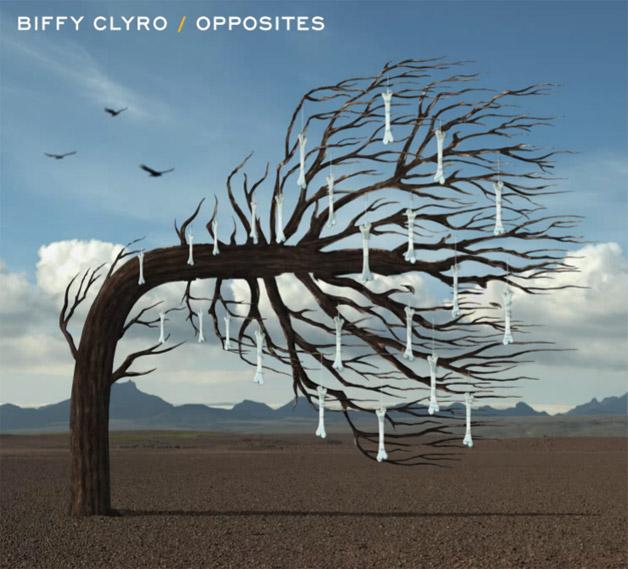 oe, it's finally out: http://newalbumreleases.net/52353/biffy-clyro-opposites-2013/
will be a few hours before I get to give it a proper listen, hopefully it won't be a letdown. I'll post a review if I have anything to say about it

event of the year

It's a shame Ronnie is no longer with us, but he is probably to busy with humiliating satan in hell. A pretty awesome list of people are contributing to the new QOTSA album.

A couple of new AiC songs leaked. I'm not gonna listen though, until the album is released.