Consensual sex with an 8 year old.

Don't think they had sex.

Just exposed themselves and touched her up a bit.

Juventino17 said:
You mean Kaunas zoo?
Click to expand...
No, there is a mini zoo near Klaipeda, it's a fun place since all the non meat eating animals run freely there
OP
OP

The 'victim' has admitted under cross-examination that she lied about everything.

http://www.timesonline.co.uk/tol/news/uk/crime/article7125357.ece
Click to expand...
Jumping to conclusions, i said the story was fucking nasty, i didnt say anything about any of the kids!

juve's big fan said:
An eight-year-old girl was raped by two 10-year-old boys while out playing with her younger sister near her home in west London, the Old Bailey has heard.

The girl, who was allegedly raped in a field, later told her mother what had happened, jurors heard.

The offences are alleged to have happened in October 2009.

The alleged rape happened near to where all the children - who knew each other - lived, the court heard.

The boys, who are now aged 10 and 11, are among the youngest to be charged with rape in the UK.

The jury was told that the court's sitting hours had been shortened and other steps would be taken because the defendants were so young.

The judge, Mr Justice Saunders, sat where the court clerk normally sits so he was on the same level as the boys.

Rosina Cottage, prosecuting, told the court the mother went looking for the girl after her younger sister, who she had been playing with, returned home without her.

Miss Cottage told the court: "This case concerns rape by two boys still at primary school of a girl even younger than them.

"Together they took her to different locations near where they lived in order to find a sufficiently secluded spot to assault her.

"The events leading to the alleged rapes all took place in and around a block of flats and they ended in a field."

Miss Cottage said when the victim's mother and younger sister went to fetch her, they bumped into the mother of the younger defendant and a five-year-old playmate.

He pointed over to the field and the women went to find the children. The girl's mother went into the field but could not locate her.

When she did find her, the woman "could see things were not right with her daughter", Miss Cottage said.

She told the court the mother later asked the girl what was wrong and the girl told her mother that the boys had taken her to the block of flats where they had moved the bins in a bin shed so that she could not get out.

Miss Cottage added: "When a car pulled up the boys had taken her out of the bin shed and taken her to the fields.

"She told them to leave her alone."

The boys then assaulted her, the court heard.

Miss Cottage said the girl's mother spotted the older boy and asked what happened but he replied "nothing".

The younger boy joined them and, before anything was asked, allegedly said: "I didn't touch her."

The court was told the older boy then added: "It wasn't me. It was (the other boy)."

The girl was then taken to hospital because she was complaining of pains in her stomach, the court heard.

She gave evidence via videolink from another room of the court and told how she was taken to the bin shed before being taken to the field.

What has the world turned to, young kids now group gang others..
Click to expand...
Wow, that's gross. Ban the burqa already, dammit!

The 'victim' has admitted under cross-examination that she lied about everything.

http://www.timesonline.co.uk/tol/news/uk/crime/article7125357.ece
Click to expand...
I bet you knew all along..

I knew it was an ongoing trial in which not all evidence had been heard.
OP
OP

3 metre 'King of Herring' found in Sweden
A rare 12-foot long Giant Oarfish - the world's largest bony fish, also known as the 'king of herring' - has been found off the coast of Sweden for the first time in 130 years. 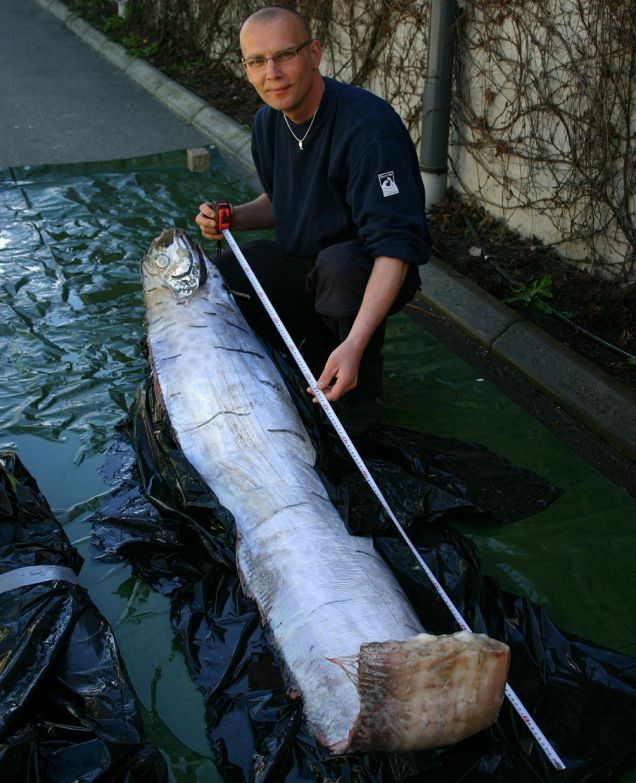 The dead fish was spotted in Bovallstrand on Sweden's west coast by 73-year-old resident Kurt Ove Eriksson, who found it floating near the shore on Saturday.

'It was very long and shiny,' Eriksson told The Associated Press on Wednesday. 'It also had whiskers, even though it looked like they had been broken off. And a strange light-pink dorsal fin.'

It was handed over to The House of the Sea aquarium in the town of Lysekil, where expert Roger Jansson says it's being kept pending a decision on what to do with it.

Johansson said on Wednesday the Giant Oarfish can grow up to 36 feet (11 meters), and is believed to live in deep waters. He says the last recorded discovery in Sweden was in 1879.

'I've been fishing around here since 1957 and I've never seen anything like it,' said Eriksson. 'But I've seen enough fish to know that it was a deep-water fish.'

Sightings of the Giant Oarfish are believed to have inspired tales of sea serpents.

Liverpool are mourning the loss of former striker Besian Idrizaj, who died of a heart attack this morning.

The 22-year-old spent three years at Anfield after signing from LASK Linz in the summer of 2005 but failed to make a senior appearance for the Reds and joined German side FC Eilenburg, following loan spells with Luton Town, Crystal Palace and Wacker Innsbruck.

Reports in the attacker's native Austria claim that he died in the early hours of Saturday morning at the family home.

Hailed as one of his nation's most promising players, Idrizaj arrived on Merseyside on the back of a glittering U17 European Championships in 2004 but a series of health problems led him to collapse on a number of occasions and restricted his short-lived career.

Whilst he never made a lasting impression on Kopites, some supporters will have fond memories of his 23-minute hattrick in a pre-season friendly against Wrexham in July 2007.

No one from Liverpool Football Club was available for comment at time of going to press.

Makes you proud :dielaugh:
Click to expand...
Suddenly the cunt John Terry has been looks justified.

Matador gored by a bull

Where's the blood? WHERE'S THE BLOOD?!