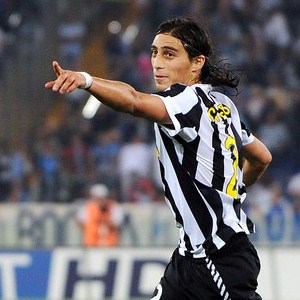 José Martín Cáceres signed for Barça in the summer of 2008 after a good season with Recreativo Huelva. The young Uruguayan defender had had, until then, a short, but intense, sporting career.

Martín Cáceres (7 April, 1987) started his career in the junior ranks of Defensor Montevideo and made his debut in the Uruguayan first division for the club in 2006. He played seventeen games, scored four goals and was shown five yellow cards. In the following season he would only play nine games with Defensor because his professional career would take a big step forward in the summer of 2007.
First, he took part in the South America U-20s championships where he helped Uruguay to third place as well as being named the tournament’s best defender. Cáceres repeated his fine performances in the U-20s World Cup in Canada and so generated interest from some European clubs.

Villarreal signed him in August 2007 but loaned him out to Recreativo. Martín Cáceres played a huge role in keeping the Andalusian side in the first division. Wearing the number 4 shirt, he played 34 games, scoring two goals and receiving ten yellow cards.

His fine season in Huelva brought him some recognition. He was included in UEFA’s team of upcoming stars for the 2007/08 season, along with Bojan Krkic. He also became a permanent fixture in the Uruguayan national side. His progress attracted FC Barcelona, who signed him in the summer of 2008.

Cáceres has struggled to find a place in Guardiola’s first team plans, but still made 23 appearances in his first season.

Martín Cáceres, who stands at 1.82m, is noted for his aerial power, speed, aggression and bravery. And as well as playing as a central defender he can also play at full back or in a holding midfield role. With both Defensor Montevideo and Recreativo, as well as the Uruguayan national side, he has shown great leadership skills in defence, despite his young age.

oh and I don't know nothing about this guy, but I hope it works out !

Official???? great..Were is he gonna play in the defence??

i hope you can become a new rock in our defence!

welcome martin! hopefully you'll surpass everyone's expectations and then some. unlock that potential under the guidance of ciro and cana.

awesome job by secco and co. in refitting the squad this mercato.

Welcome Martin! All the best here.

Gonna be first with the cheesy crappy youtube link

Not convinced, but hope he'll prove me wrong.

I have a good feeling about this guy.

I know he will do great. "He is great in PES as well"

I know he will do great. "He is great in PES as well"
Click to expand...
Game of PES in the morning, a bit of stoning in the afternoon?