Mark Iuliano (born 12 August 1973 in Cosenza) is an Italian football manager most recently in charge of Serie B club Latina and retired professional footballer who played as defender.

Iuliano spent the bulk of his playing career with, Juventus, in the Serie A, a club with which he won several domestic and international trophies. At international level, he represented the Italy national football team at UEFA Euro 2000, reaching the final, and at the 2002 FIFA World Cup.

Mark Iuliano started his professional football career with Salernitana Calcio in 1990. He would transfer to Bologna FC on a season loan deal in 1992 and scored 1 goal in 24 appearances. After returning to Salerno, he was again sent out on loan in 1993, for another season loang loan deal. This time, Iuliano moved to A.C. Monza He would go on to make 16 appearances for the club. After two impressive loan spells in Bologna and Monza, Iuliano returned to Salernitana Calcio, and became a regular starter after his return, making over 85 appearances, and scoring a single goal from both centre back and full back.

After greatly impressing in his second spell with Salernitana, Iuliano caught the eye of several major scouts, most notably those of Serie A giants Juventus F.C.. In July 1996, Iuliano transferred to the Torino based outfit, and was a big hit right from the start, as Juve continued their Serie A and European dominance. He made his Serie A début on 15 September 1996, 2–1 win over Cagliari Calcio. In his first season with Juventus he played in 21 league games scoring a single goal. Iuliano is also known for the episode involving Ronaldo where Inter claimed a penalty. Up to this day, newspapers cite this episode and in a recent interview to the newspaper "Il Tirreno" the referee, Piero Ceccarini, clarified, "From the images it is clear that Ronaldo runs into Iuliano, not vice versa: as a matter of fact, the Juventus player falls backwards, resulting from the impact of Ronaldo running into him. I was on the pitch, a few meters away. The intention of the defender was to stop the attacker's progression, but the attacker moved the ball and the defender did not follow it. Iuliano was stationary at the moment of contact, there are no doubts about this. I told Pagliuca (Inter's goalkeeper) that in basketball this would be an offensive foul. Perhaps I ought to have whistled a foul in favour of Juventus". Iuliano would become an eventual starter for the club the following season, but was hampered by injuries in the 1999–2000 season, limiting him to just 20 appearances. Juventus had what was considered as the best defence in the world at this time, and teams strongly regretted ever going down a goal to the club, as they knew how hard it would be to score one back for themselves. Iuliano formed impressive defensive partnerships with the likes of Ciro Ferrara, Moreno Torricelli, Paolo Montero, Gianluca Pessotto, Lilian Thuram, Alessandro Birindelli, Igor Tudor, Gianluca Zambrotta, Nicola Legrottaglie, and Fabio Cannavaro during his 10-year tenure with the club. After the 2004–2005 Serie A triumph, veteran teammates Paolo Montero and Ciro Ferrara called it quits on their Juventus career (this title was later revoked following Juventus's involvement in the 2006 Calciopoli scandal). The Uruguayan opted to return to his homeland, while Iuliano remained, but in January 2005, he left for La Liga side RCD Mallorca on free transfer after having not played regularly in the first portion season. Iuliano made well over 200 total appearances for i bianconeri, scoring nearly 15 goals. During his time at Juventus, Iuliano won 4 Serie A titles, an Intercontinental Cup, an UEFA Supercup and three Italian Supercups, also reaching three UEFA Champions League finals (in 1997, 1998, and 2003) and two Coppa Italia finals (in 2002 and 2004).

Iuliano transferred to RCD Mallorca in the Spanish La Liga in the summer of 2005 after 10 years with Juventus. He would remain at the club for only one season however, despite a fairly decent season starting 29 total games and scoring 4 goals.

Iuliano returned to Italy in January 2006, by transferring to Serie A club, UC Sampdoria. He remained at the Genoa based club for just a mere six months, before a July transfer away from Liguria after making just 4 appearances in the league.

After a disappointing period with Sampdoria, Iuliano moved to Sicilian club F.C. Messina Peloro in the summer of 2006. After two consecutive fairly impressive Serie A seasons, Messina failed to avoid relegation in the 2006–2007 Serie A season. Iuliano made a total of 24 appearances for the club between the Coppa Italia and the Serie A, and scored 1 goal. Following Messina's relegation to Serie B, Iuliano's contract was not renewed, and hence he became a free agent on 1 July 2007.

Iuliano was unable to find a club during the 2007 summer transfer window, and was linked with a return to former club Juventus, following their re-building of the club's squad. This news turned out to be just rumours, as the deal never took off, and Iuliano remained a free agent for the next 6 months. After those 6 months without a club, he signed for Serie B side Ravenna Calcio in January 2008. The veteran was instantly inserted into the starting eleven, and picked up good form before he failed a doping test after playing for Ravenna Calcio in a Serie B match against A.C. Cesena, in May 2008. After being found positive for cocaine he was successively disqualified for two years.

After this series of events, Iuliano opted to call it quits on his career and officially retired from professional football in June 2008; he was 35 years old.

Iuliano was a regular in the Italy national football team setup during the peak of his career as he earned his first call-up in 1998 and received his last cap in 2003. He appeared for the Italy national football team at UEFA Euro 2000, where Italy finished in 2nd place, and in the FIFA World Cup 2002. He would make 19 total international appearances, scoring one goal for his country. His début came on 5 September 1998 against Wales. He scored his only international goal against Portugal on 26 April 2000.

Regarded as one of the best and most consistent Italian defenders of his generation, Iuliano was a large, tenacious, and strong defender, who excelled in the air, and who was an accomplished man-marker and an experienced tackler; he usually played as a centre-back, although he was a versatile player, who was also capable of playing as a full-back.

After retirement, Iuliano took a role as youth coach for the Allievi Nazionali at Pavia in 2012.

On July 2014, Iuliano was appointed as youth coach at Serie B club Latina. On 5 January 2015, he was promoted head coach in place of Roberto Breda, with the goal to save the club from relegation. He was sacked in November 2015. 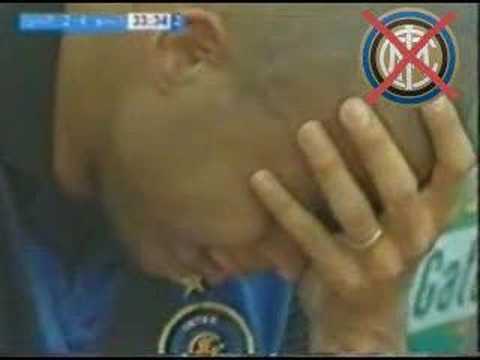 Marc said:
9 seasons in Juve, 277 apps. If you don't consider him a legend, feel free to close the thread. No hard feelings.

OK. But please sticky it. He deserves it.

Marc is working overtime this week

Never really liked him. His defending and methods were suspect at times.
OP
OP

duranfj said:
Marc is working overtime this week
Click to expand...
It's a shame I am not getting paid.

Bianconero81 said:
Never really liked him. His defending and methods were suspect at times.
Click to expand...
He was a good team player, like Pessotto, Birindelli, Torricelli, Di Livio, Tudor, etc... Definitely not on the Thuram, Nesta, Cannavaro level.

Didn't he pull a Sergio Ramos and had a nose job.

Hustini said:
Him and Montero

Click to expand...
Montero was a better player, though.

Marc said:
I had a nose job. True story.
Click to expand...
They prolly gave you a new nasal septum because you