Stop it. He had a very decent first year and up until Ajax very good second year. Atletico was his best game by far, but he was great in the first half of the season too.

Idk what happened post-Ajax, was it something more or just playing out of position under Sarri in a system very few thrived in. He was never going to be absolute WC player but still has a chance to resurrect his career if he finds the right team. Simeone and his counter-attacking football could be that for him.

Every team is going to struggle, and market prices will be impacted, but it's not all doom and gloom. Here's something for you:

https://www.football-italia.net/152460/uefa-releases-early-club-payments
Click to expand...
I heard you. The lockdown is already making me even miss Bernie lol

Agent: 'Bernardeschi talked to Barca, but...'
By Football Italia staff

Federico Bernardeschi’s agent confirmed there were some discussions with Barcelona, but he has “no intention of leaving Juventus. The fans ought to be thanking him.”
The versatile attacking midfielder-trequartista-forward has been unable to truly find his place in the Bianconeri line-up, fuelling reports of a swift exit, one that was even discussed in January.
“I have not met the directors from any other clubs about Bernardeschi,” agent Beppe Bozzo told Calciomercato.com.
“The only thing that happened was with Barcelona, and that was more an exchange of ideas than anything else. It annoys Federico to read stories that he might be leaving, but he knows above all that journalistic speculation runs rampant and that he has no intention of leaving Juve.”
Bernardeschi is very unpopular with some of the fans, who feel he hasn’t delivered on the promise shown since his move from Fiorentina.
“If people are doubting someone like Federico, then it means football is finished,” continued his agent. “Do they really think Juve spent €40m and snatched him from a crowd of other clubs for no reason?
“The issue is that Bernardeschi had to adapt to a lot of other roles and it’s paradoxical that he’s a first choice for Italy, appreciated by every coach, and criticised elsewhere.
“He realised that Juventus needed someone who would sacrifice himself for the team and he did not hold back. He’s played as a midfielder, a forward, he ran for everyone and finished games exhausted. He did what he needed to do in moments of difficulty. The fans ought to be thanking him.”

Good luck Fabio ... no one is leaving

this is new norm for Juve... so next time they should consider this before signing anyone

Thanking him for what? His agent should get a clue - useless POS.

Some years ago the slogan was "IF A PLAYER ASKS TO LEAVE, HE CAN LEAVE" and everyone left the club. Now everyone wants to stay.

He definitely ran himself into the ground, that is undeniable, and one reason why he is more frustrating than unlikeable. However he is playing for Juventus, not Juve Stabia.

lol the fans ought to be thanking him guys

Hustini said:
lol the fans ought to be thanking him guys
Click to expand...
He did send a lot of balls in the stands .
So, if he starts a match and you attend, then you have increased chances to get a ball.

Thank you, Federico! and best of luck at some other club 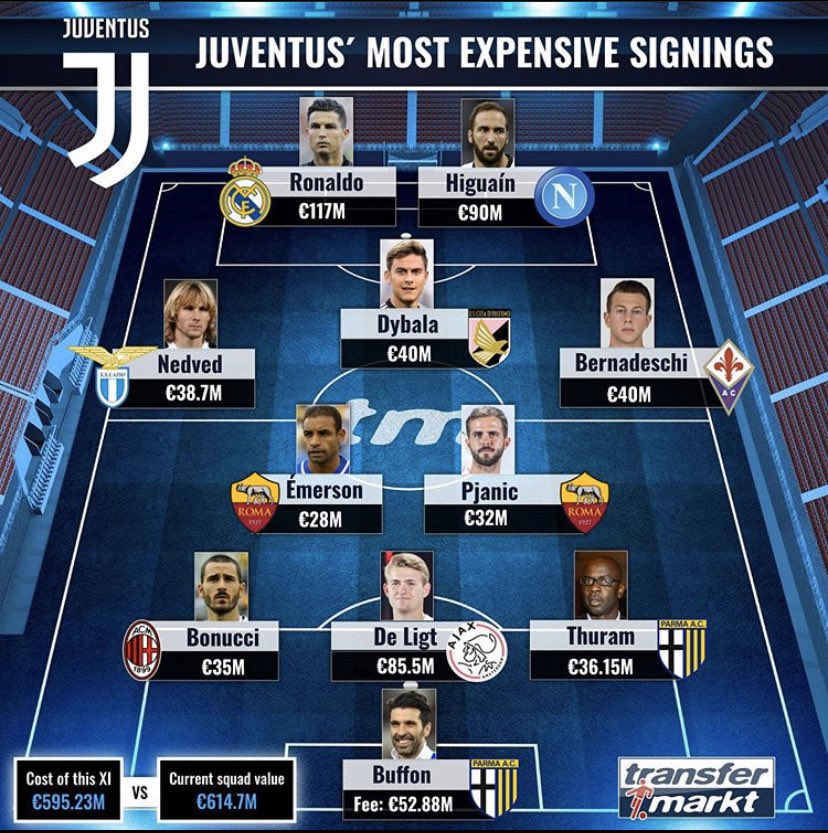 Click to expand...
But Paulo was the waste of money and time according to somes

Sad. Bonucci, Higuain, Burnturdeski, and The Benign Bosnian wouldn't even make it on my list of top 20 Juventus players (Berna not even in the top 100).

duranfj said:
But Paulo was the waste of money and time according to somes
Click to expand...
Dybala is the best money we have spent in the last 6 years.

JuveJay said:
Is that Trump?
Click to expand...
Scary mix between Bierber and Trump.