In light of recent events, and will all due respect, this man will alway be the GOAT to me. He brought this beautiful club to me. 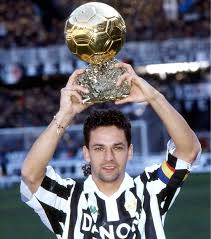 Happy 53rd Birthday to my idol, my true footballing love.

An absolute honor and privilege to see you in person twice during World Cup 94. Moments I will never forget

Happy Birthday legend.
Wish he had a longer career at Juve.

campionesidd said:
Happy Birthday legend.
Wish he had a longer career at Juve.
Click to expand...
So do I. But more importantly, I wish that he hadn't suffered 2 devastating knee injuries before he even turned 20

Baggio: 'I wanted to die'

Roberto Baggio confessed he was in such agony due to knee injuries that he asked his own mother to kill him.
One of the greatest players who ever lived, it’s remarkable to think what he could’ve achieved without the constant pain.
“When I hung up my boots for the last time, it was like being liberated,” he told the Corriere dello Sport.
“The physical pain was really torture and accompanied my entire life as a player. In the last few years, it had become more than I could bear.
“When I was playing for Brescia, I struggled to walk for two days after each game. When I got home, I couldn’t get out of the car, as I had to put one foot down on the ground and haul myself up hanging on to the door. The next Sunday, I would play again. Packed full of painkillers, but I’d play.
“I gave everything to football. It might seem a paradox, but at that moment when I retired, I felt happy and fully realised. I could not have done more. At San Siro, on my last Serie A game, and in Genoa on my final appearance for Italy, the fans repaid me for all of it.”
There was never really a time when we didn’t see Baggio affected by injuries, as his first devastating knee rupture was at the age of 18 in 1985.
“That was my ‘introduction’ to football. If I risked getting a big head with people calling me a phenomenon, reality brought me back down to earth. I put my leg down badly and left my meniscus and cruciate ligament on that pitch.
“The professors looked at my knee, shook their heads and said it was unlikely I’d ever play football again. I had six operations on my knees, four on the right and two on the left.
“In those years the meniscus was a disaster, but now it’s almost a routine operation. I had very invasive surgery and each time went into the tunnel, but I never stopped looking for the light at the end of it.
“The surgery in France was the worst. They had to drill a hole in my tibia to anchor the tendon, which had been lacerated. I couldn’t take anti-inflammatories because I was allergic.
“They put in 220 internal stitches. I was in agony. I even told my mother ‘If you love me, then kill me.’ It was the desperation of a lad who was suffering and saw the dream of a lifetime floating away, having touched it with a fingertip.
“In the two weeks after the operation, I lost 12kg. I wasn’t eating and I’d just cry all the time, for emotional and physical pain.
“If I said I never thought about throwing in the towel, I’d be lying. There were some very, very dark moments, but every time I’d react. I told myself I had to go all the way and challenge myself. I wanted to prove I was stronger than my bad luck and this dream was worth more than a knee.
“Football was always my passion. I used to take the ball with me into the bathroom. As a little child, I had a recurring dream that I would play a World Cup Final against Brazil. I am one of those humans fortunate enough to have lived an actual dream.
“I suffered, I cried and was afraid, but that day did come.
“What was my happiest moment as a player? In all honesty, I couldn’t say. Injuries taught me that every happy moment can be wiped out afterwards, so I got accustomed to thinking the next day would be better than the one I just had.
“My best goal was perhaps the lob I scored for Brescia against Atalanta. Or one I netted against Roma, again for Brescia.
“Carlo Mazzone gave me so much at Brescia. He still believed in me, gave me the chance to have another four years in football, full of meaning. He is a plain-speaking, sincere man in a world often full of liars, opportunists and suck-ups.
“I am still fond of all the teams I played for, although the club I really support is Boca Juniors.”
Baggio was also helped during these dark times by his faith in Buddhism.
“I came from a Catholic family, but in Florence a friend who had been practising for some time invited me along. I was sceptical, but within three days realised that was my path.
“I realised when things go wrong, you tend to always blame others and cast yourself as the victim. I was wrong to think like that. There’s no point justifying why you don’t reach your objectives, your desires. It’s a waste of time. Your destiny is always in your hands.”

He supports Boca Juniors, how random

Quetzalcoatl said:
He supports Boca Juniors, how random
Click to expand...
I think he does because he mentioned the atmosphere of the stadium and the fans. IIRC he ws watching a match on TV, and the crowd was going absolutely nuts. Then someone told him that the fans were Boca Fans, and they were losing 4-0 at the time

KB824 said:
I think he does because he mentioned the atmosphere of the stadium and the fans. IIRC he ws watching a match on TV, and the crowd was going absolutely nuts. Then someone told him that the fans were Boca Fans, and they were losing 4-0 at the time
Click to expand...
Ah, that's cool. Makes sense, those Argies are famous for that.

Quetzalcoatl said:
Ah, that's cool. Makes sense, those Argies are famous for that.

Gotta go see a Superclasico.
Click to expand...
Yeah, my wife won't have me go anywhere near any South American countries

KB824 said:
Yeah, my wife won't have me go anywhere near any South American countries