Okay, normally I wouldn't make a thread about a match that so few people care about, but I'm only doing this because I'm probably buying tickets to this match since it's in Sydney, and Australia will be at full strength.

I'll be getting an adult ticket (over 16, even if you're a student), and the prices are $50, $35 and $20 for Category A, Cat B and Cat C respectively, and I think that's decent value. I have uni until 9pm that day :sob:, but I think this should be worth the watch :thumb:

So any Sydney-siders are very welcome to join me; maybe we should finally meet up

Australia v Solomon Islands
Family Ticket comprises of 2 Adults & 2 Juniors (under 16). These tickets are allocated in the Non Alcohol Area

Australia takes an important step toward the 2006 FIFA World Cup with a VITAL match-up against the Solomon Islands on October 12 in Sydney. This is the final leg of a home and away series to determine which Oceania team competes in the 2005 FIFA Confederations Cup - a tournament which incldues current World Cup holders, Brazil, Euro 2004 Champions, Greece and World Cup hosts, Germany.

The Qantas Socceroos last played the Solomon Islands in Adelaide in June and that match ended in a nail-biting 2-all draw. They need your support to bring home a win in Sydney.

This is your last chance this year to see the Socceroos live in Sydney. Be there at the game to see your national team and witness the first step toward the 2006 FIFA World Cup.

Family packages are exclusive to Football Families and designated seating will provide a unique entertainment experience.

* Additional Information Family
Tickets are sold in the Family Area on the southern end of the ground. This area is a Non Alcohol Area.
* Concessions
Valid for children 4-16 yrs inclusive (under 4 are free on the knee)
Full Time Tertiary Students (Valid ID Required)
Pensioners - Aged/TPI (Valid ID Required)
* "Fanatic" Supporters Bay
Located in Bay 23.
* The Green and Gold Army Bay
Located in Bay 26.


'Football Family' Offer/Competition
By purchasing tickets through the "Football Family" offer, you go into the draw to WIN a dinner for 4 with the Socceroos in Sydney prior to the Solomon Islands match. This ticket purchase offer commences on Sun Sep 5, 9am.
* Offer ends Sept 20.

Liverpool ace Harry Kewell will make the long trip for the games despite the chronic ankle problem that has restricted his appearances for the national team while Malaysian-based duo Ante Milicic and Simon Colosimo and Leicester's Danny Tiatto have made the squad despite missing the four-day camp in London earlier this month.

Jade North and Archie Thompson have been overlooked.

"Tiatto didn't come in to camp due to club commitments but he is fine now. Kevin Muscat looked good in camp and he is ready to roll," said Farina, who will reduce the squad to 18 or 20 ahead of the October games.

"It's a completely full strength squad. These are hugely important matches for us and we will be ensuring we put the best team on the paddock."

"The chance to qualify for the Confederations Cup and get quality matches against nations like Brazil, Greece, Argentina and Germany is vitally important to our chances of World Cup qualification so we won't be taking any chances," added Farina.

"I don't think any payers will have trouble being motivated for these games. They are professional footballers and will do what's necessary to get the job done."

Australia and Solomon Islands reached the final of the OFC Nations Cup by finishing first and second after Stage Two of the competition held in Adelaide during June. In a thrilling final game the two nations finished their match in a 2-all draw.

"They were well organised and disciplined in Adelaide and two or three of their players have the ability to cause teams trouble," Farina explained. "We must respect them and with a big crowd of some 25-26,000 in Honiara it won't be just the weather that is hot."

Solomon Islands will host the first leg of the series in Honiara on Saturday, October 9 with the Australian leg of the home-and-away series at Aussie Stadium in Sydney on October 12.

Farina rejected suggestions that he could let some big name players return to their clubs after the first game, should it result in a big win.

"The squad stays together," he stated.

The Australian squad is scheduled to arrive in Honiara on Thursday, October 7 and will fly back to Sydney for the return leg immediately after the first leg.

You gotta love Harry Kewell, or atleast the old Harry.

Viduka is cool too.

Max Vieri, he choose Austrailia. Never knew that. I hear Vieri was a good cricketer and use to play in Austrailia.

Most of them play in Britain. :strong:


Australia fulll strength squad and Malaysian based player among them......i thot its illegal to hire anything but people who fail in their country to play in Malaysia...

never knew they were thaat good...


make it even sweeter for my state team Terengganu to beat the real-madridish Pahang to reach the FA Cup Final...

when did football reach Australia? :dazed:

++ [ originally posted by Majed ] ++
when did football reach Australia? :dazed:

++ [ originally posted by K10 ] ++
You gotta love Harry Kewell, or atleast the old Harry.
Click to expand...
True, he's gone downhill a lot since his injury, but hopefully he'll be back to his best.

++ [ originally posted by K10 ] ++
Max Vieri, he choose Austrailia. Never knew that.
Click to expand...
I think it's stupid how he gets selected for Australia simply because his last name's Vieri. There's probably so many more talented Australian players out there (including myself )

++ [ originally posted by K10 ] ++
Where's Bosnich these days?
Click to expand...
No idea to be honest. I think he pretty much gave up on football after that drug ban... it's kinda sad, how he went from Manchester United goalkeeper to a laughingstock

He was totally awesome back in the Villa days though. He made the greatest save ever (forget who against). It was just so good
OP

Yeah, I always thought he sucked, but since when have Man Utd dropped a keeper because he sucks? (Barthez

) His career looked fairly promising whether he was good or not, since all you need is a name to succeed in football. Unfortunately for him, he rubbed his name in the dirt shortly afterwards

And Bos really did used to be one of the greatest keepers in England.

who scored that goal again? Was it Southgate or Le Tissier?

With Man Utd? heh. No he totally sucked. He had a great debut against Liverpool where he was voted Man of the match. But after that it all went downhill. Including letting the easiest of shots slip between his legs, and having the MU goalkeeper coach come on various times to teach him how to catch the ball and tell him not to run out to punch it like a mad man every corner.

A decent keeper i think. Didnt he even score a goal after leaving MU?

Interestingly enough, Taibi had a pretty decent performance against us just the other day

Yeah hes a good keeper. The season after he left MU he was fantastic. He just REALLY sucked with MU He made the big error and just couldnt get over it and handle the pressure i think.
OP 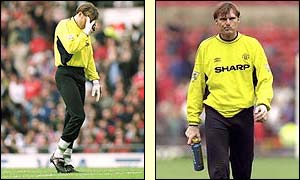 Those were the days

He was the greatest. Man U or not, he was an absolute legend