uefa.com said:
The UEFA Youth League is the first youth competition at club level and has been established following requests made by clubs via the European Club Association. The 2013/14 season is its first edition.

Knockout rounds and final
The knockout phase will be of single-leg ties, meaning maximum total of ten matches for any team, with the semi-finals and final played in the form of a final tournament at a neutral venue. There will be no third-place play-off game.
Click to expand...

uefa.com said:
The group stage of the inaugural edition of the UEFA Youth League will parallel that of the UEFA Champions League after 32 clubs confirmed their involvement in the U19 competition.

The 32 clubs who feature in this season's UEFA Champions League will have the chance to test their young players in the UEFA Youth League after last night's final five qualifiers confirmed the lineup for the inaugural edition of the Under-19 club competition.

The UEFA Youth League will give the talents of tomorrow an opportunity to gain international experience at club level, with UEFA long having organised successful youth tournaments for international teams.

UEFA General Secretary Gianni Infantino expects the competition to play a major role in the development of the participants. "One of the key objectives of the UEFA Youth League, especially for the clubs and for us as competition organisers, is to help players get additional experience which will help them to bridge the gap to their first team," he said.

"It is an objective of UEFA and of European football to form and train players, so this competition is also focusing on locally trained players, on club academies, on the development of players."

The group stage of the UEFA Youth League will parallel that of the UEFA Champions League before a 'Road to the Final' concept comes into play for the knockout phase.

The draws for all the knockout rounds – all of which are single matches rather than being played over two legs – will take place on 13 December, and will work like this:

Semi-finals and final (Colovray Stadium, Nyon)
The winners of the two semi-finals, to be played on Friday 11 April, opposite UEFA's Swiss headquarters, will meet in the final on Monday 14 April for the right to become the first winners of the Lennart Johansson Trophy, named after UEFA's honorary president.

Note: All knockout ties will go straight to penalties at full time (no extra time).
Click to expand...

I'm guessing this was hastily arranged after the Next Gen competition fell apart.

Weak clubs are going to suffer even more when they lose their best youth players for free.
OP
OP

Pol Garcia not included in our squad ?

I hope we will be able to watch these games. Quality streams are in order
OP
OP

Is any channel showing this game?
OP
OP 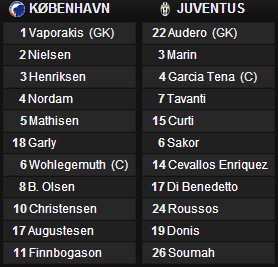 12'
Marin (Juventus) scores an own goal.

can't find a stream for this game.

Audero magical out there it seems.

What a shitty match...

An own goal and a last second PK...
OP
OP

Why can we not beat this club?
OP
OP

Our game was played in Stadio Gino Pistoni in Ivrea, 50 km from Turin.

Top of the table

Sounds too much like the Hitler Youth League for my tastes...