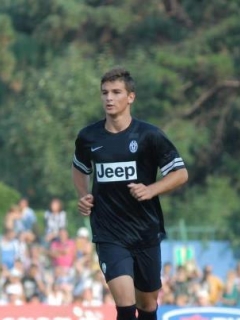 2011/12
Netted 4 goals in 15 games for the Empoli primavera squad.Kept it clean picking up just the one yellow card in that period.
Scored for Albania U19 in 3-1 friendly victory over Bosnia.

2012/13
Moving to Juventus on loan in late August, Elvis quickly earned regular playing time with the primavera. He has been a regular in the starting XI for our primavera NextGen matches, starting 5 out of 6 games in the group stage. Likewise in the primavera u19 league he has started in 12 of our 18 fixtures played. The signs are very promising. Presently he is with Baroni and the boys fighting for victory at the torneo di Viareggio, in which he has started the first two matches, then appeared as sub in the final group game.

He has represented his country twice this season, scoring in the 3-1 win over Belgium and also appearing in the heavy 3-0 defeat to Italy.

Given his growing success with our primavera and sharp development curve domestically and with the Albanian national squads, its highly likely that we will take up our option to purchase outright the talented youngster in the Summer.(EU$1.8m)

Information regarding the brilliantly named Elvis Kabashi is far from freely available to my english eyes, and the below are the scraps I have managed to gather...

The albanian flying winger, who can also be deployed in a central midfield, or attacking midfield role, joined Juventus in the summer of 2012, on loan from Empoli, with an option to purchase at a set price once the loan expires.

A regular in the Albania U19 team, also selected for the squad of the Albania U21 in late 2012, though yet to make his debut. Purely finding himself in the squad with the U21s at the age of just 18 is a testament to his ability and the confidence in his talent of the management. However, Kabashi caused consternation in late February when declining the invitation of the Albanian Football Federation to be a part of the U12 squad for the international friendly against Macedonia. Much has been made in the media about his decision, with the usual suspect quotes appearing such as 'im too good for that team', when the truth of the matter appears that young Elvis made it clear his obligations to Juventus are more important presently than his appearances in friendly games for his country, indicating that its crucial for his training and momentum with the Juve primavera not be interrupted at this stage. There is also a story suggesting his father was annoyed that a fellow albanian, playing for the Empoli senior side was called up for the Albanian senior squad, and in response, refused to allow Elvis to don his blue suede shoes and hotfoot it back to the motherland...finally, to add another page to this increasingly complex web of deceit, treachery and blossoming natural talent, Elvis apparently refused an invitation from the Italian football federation to play for them, citing that he had red and black in his blood.

According to the media he was apparently the 'best player on the field' during Albania's 3-1 victory over Bosnia U19 last year. He also scored a penalty for Albania against Belgium in a U19 EURO qualifier in late 2012.
(EURO U19 QUALIFIER Belgium v Albania)

His idol is Marchisio. The Albanian football community thinks very highly of the chap indeed, pretty much unanimously agreeing that he is destined for greatness. A sign of Conte and Baroni's positive opinions towards the player are the two occasions in January when he made the bench for the senior side (v Udinese serie a, Lazio coppa).

Oh I have seen that goal! He is very talented player. He will probably get loaned in the summer.

Can't wait to see this "new generation" of primavera guys at senio squad. It seems that Marotta, Paratici and Baroni are really working hard on this, harder than before 2010.

Furino said:
Can't wait to see this "new generation" of primavera guys at senio squad. It seems that Marotta, Paratici and Baroni are really working hard on this, harder than before 2010.
Click to expand...
Serie B next season will be exciting for you then

piotrr said:
Serie B next season will be exciting for you then
Click to expand...
Meh, I meant Juventus senior squad. It seems paintfull for me watching Serie B for one player in the match, when Lo-Pan is giving reliable reports. I want to see replacing of Padoin, Giaccherini, Matri, Peluso, Pepe and De Ceglie with the young guys.

thought he is Japanese.

AlexJuventino said:
He isnt italian
Click to expand...
I am uncertain as to whether he was born in Italy, or has an italian parent...for he apparently turned down the chance to join the italian U21 set-up recently, which suggests one of the two aforementioned reasons. More likely a parent has italian ancestry. I'll find out for sure soon enough...

Lo-Pan said:
I am uncertain as to whether he was born in Italy, or has an italian parent...for he apparently turned down the chance to join the italian U21 set-up recently, which suggests one of the two aforementioned reasons. More likely a parent has italian ancestry. I'll find out for sure soon enough...
Click to expand...
o okay thanks i wasnt sure. I think maybe he has a passport rather then ancestory

Easiest deduction is ethnic albanian born and raised in Italy. And yeah like oldlady said first thing I thought when we were first rumoured with him last year was "Japanese?"

He's playing for Albania so that's obviously all that matters.

The new Zidane, anyone? I think so. Watch him blossom.

Bashi is 'bridge' suffix in Japanese.

I don't think Kabashi makes sense. But Okabashi would be something like 'bridge between hills'.

An albanian supporter has informed me that young Elvis was born in Durrës, Albania, of two albanian parents...I will dig deeper until I find bones.

Why is this sticky?

Because his first name is Elvis.

Elvis is a badass name