Dominic said:
I'll say it again: Chiellini will be the Juve captain in the distant future.
Click to expand... 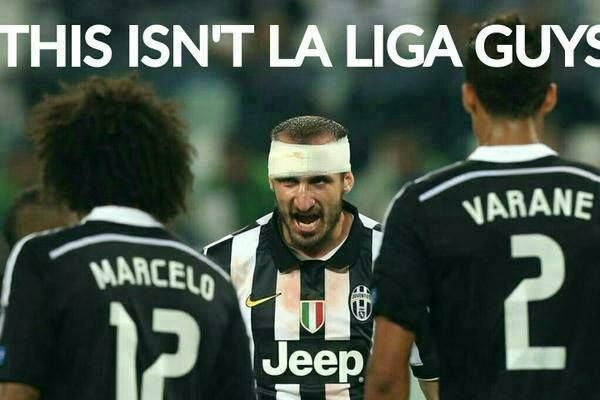 Afghan_juventus said:
Demiral maybe, but De Ligt gets into the starting 11 of very few top teams.
Click to expand...

You guys think he will come back as a starter next season or is that over for him due to his age and the injury?

I hope he can start the important games alongside De Ligt. I don't trust Bonucci, and I still feel Chiellini is probably our best defender when fit.

By 2021, the starting duo should be De Ligt and Demiral.

BayernFan said:
You guys think he will come back as a starter next season or is that over for him due to his age and the injury?

Always admired his defending.
Click to expand...
Whenever fit he should definitely start, but there's obviously a big question mark regarding his injuries, this could be the make or break season for him before retiring, mentally i think he is prepared but then there's again the same fitness concerns that might take their toll.

Time will tell, my hopes are up though.

Demiral should be very worried about his chances to feature this season. Capitano still got it. Great defensive display against the dutch.

K.O. said:
Demiral should be very worried about his chances to feature this season. Capitano still got it. Great defensive display against the dutch.
Click to expand...
He looks like he has his legs back. Encouraging
Locatelli looked better than van de beek by a lot.

MOTM performance against the dutch.

Looking forward to seeing him back with us this season, really showed tonight how much we've been missing him too lately.

What did he do? I dont pay attention to friendlies

lgorTudor said:
What did he do? I dont pay attention to friendlies
Click to expand...
For starters he made Depay his bitch and then just based on what i've seen he practically had perhaps the most clearences and aerial wons during the game ,don't really have the stats in front of me, but imo overall he bossed it defensively out there, the clean sheet is largely on him.

didn't watch the whole match, but when i caught chiellini doing his job, he was stellar. his and demiral's form (vs hungary) are probably the best news of the summer.

Man what a performance. 36 years of age, coming off a horrible ACL injury, and still so dominant. One of the best in the world. What a player.

I thought he was finished,sorry King Kong

Sent from my iPhone using Tapatalk

Afghan_juventus said:
Do you think De Ligt would start at Madrid, Bayern or Liverpool?
Click to expand...
What a question lol.

Memphis Depay, heavily linked with a potential move to Barcelona to work under Koeman, was largely isolated and unable to affect the Dutch attack as Italy made it six games unbeaten against the Oranje.

Much of Depay's lack of openings was down to him being marshalled superbly by Giorgio Chiellini, who made eight clearances and four interceptions - the most of any Italy player.
Click to expand...

also, his post-match interview in full as per - https://www.football-italia.net/158239/chiellini-italy-high-level-two-years

Giorgio Chiellini enjoyed his Italy comeback and was not surprised by the 1-0 win in the Netherlands. ‘We’ve been playing at a high level for two years.’

The Azzurri resumed their victorious streak with their 12th in 13 games thanks to a Nicolò Barella header in Amsterdam.

“We prepared well for this game and have been playing at a high level for the last two years,” the captain told RAI Sport.

“After so many months under lockdown and a strange summer too, it wasn’t easy to get back on track. We won against a great team and probably deserved a few more goals.

“When we got tired towards the end, we also did well to defend, because that’s part of the game too, you have to roll your sleeves up at times.”

This was Chiellini’s first Italy game in over a year, since his anterior cruciate ligament injury.

“I did miss playing on a ‘big’ pitch, as the training ground turf is never quite as large, so it takes a while to get the hang of the distances and I missed the tension of a real game. I’m happy to be back.”

Of course, Chiellini was meant to be in the starting XI against Bosnia-Herzegovina rather than Francesco Acerbi on Friday, but Roberto Mancini didn’t have his glasses on when reviewing the squad list and did not spot the error.

“I believe in fate and I think it was my destiny that I should play here instead,” smiled the Juventus defender.

“We’re top of the group now, I think deservedly, and we want to continue along this path over the next few months.”

Poland earned a 2-1 victory away to Bosnia-Herzegovina this evening, so Italy go top of their Nations League group with four points, followed by the Netherlands and Poland on three, Bosnia with one.
Click to expand...