Snobist said:
So you expect Melo to come out and say “Thank you Chiellini, you’re the best”.

Chiellini should have kept his mouth shut or since he’s at it should have told everybody what happened in Cardif since you like the truth very much.

P.S. i dont get why some players publish autobiography books while being still active.
Click to expand...
let's have little math here :

wait for Cr7
Click to expand...
If we judge it from the $$$ perspective then well done. Dont justify it by saying Balo and Melo are shitheads.

He can say whatever he wants, but he should have waited few years to publish it. Im all for free speech. I dont know how his teammates feel about him now.

There are so many chapters and story in his biography

But journalist highlight these 2 little comments he made for Balo and Melo. These highlights don't even tell the context or story why Chiello has these kind of opinion. There must be a story why he said it.

Journalist love to stir the news with this kind of report. They can also ask Balo and Melo response and made a headline.

Cut the man some slack! Honestly being politically correct is overrated these days. At Juve, we breed too much humility and respect towards opponents. And that has caused us to falter in ECL final.

To win, you need to be ruthless. Sportsmen like Mcgregor and CR7 never backs down from speaking the truth and backs it up with performance.

Honestly, to Melo and Balo: if Chiellini says that you are crap human, you damn well must be.

Other than his stance against racism, Balo has done nothing for the footballing world. His resume is a huge thank to the world’s best agent Raiola. That guy sells shit for gold.

Melo is just a bald version of Sergio Ramos. Trash of a human being whose family are only stickin around cus of their football money.

Honestly, chiellini should have added in sergio Ramos. That guy is Osama and Sadam’s love son.

I dont mind Chiellini having a negative opinion on players and sharing them publicly.. but it should be done once hes retired & not during his playing career..

Nah i think it is great that he speaks out while he is still playing. If he does that after retirement, he will just look like an old fool trying to stay relevant.

Look at fools like Roy Keane. Constantly whining about past and present players/managers now just to get himself on newspaper. That old dude is so out of touch with reality. If you put Roy Keane in modern day premier League, he will at most be a Ndombele level player.

wait for Cr7
Click to expand...
Chiellini will only get a fraction of that, the rest goes to publishers and other parties involved

Melo and Bali should probably pay Chiellini for bringing their name up in papers again. These two irrelevant mediocre kunts.

_GGB_ said:
I dont mind Chiellini having a negative opinion on players and sharing them publicly.. but it should be done once hes retired & not during his playing career..
Click to expand...
He won't face Melo again, and Balotelli has been semi-retired for years, but it will be interesting to see if they do meet again...

Perhaps Balo will actually move his ass next time they meet, he always needs some motivation. My money would be on Chiello getting him sent off, because one of these two men is smart, and the other is a child-like idiot.

Agree. Everyone knows this stuff is true. People blaming racism show no critica thinking ability bc those two are complete idiots. That being said: I think things are better said to their face than through books and specifically with Balo playing in the same league, it was probably better to wait before saying it.

Melo at it again

But when materazzi slates Juve nobody bats an eye lid. When chiellini says he hates inter or anyone... its fucking civil war

DAiDEViL said:
Melo at it again

Butthurt dog.
Click to expand...
Send him a picture of his red card at the 2010 world cup, that'll cheer him up 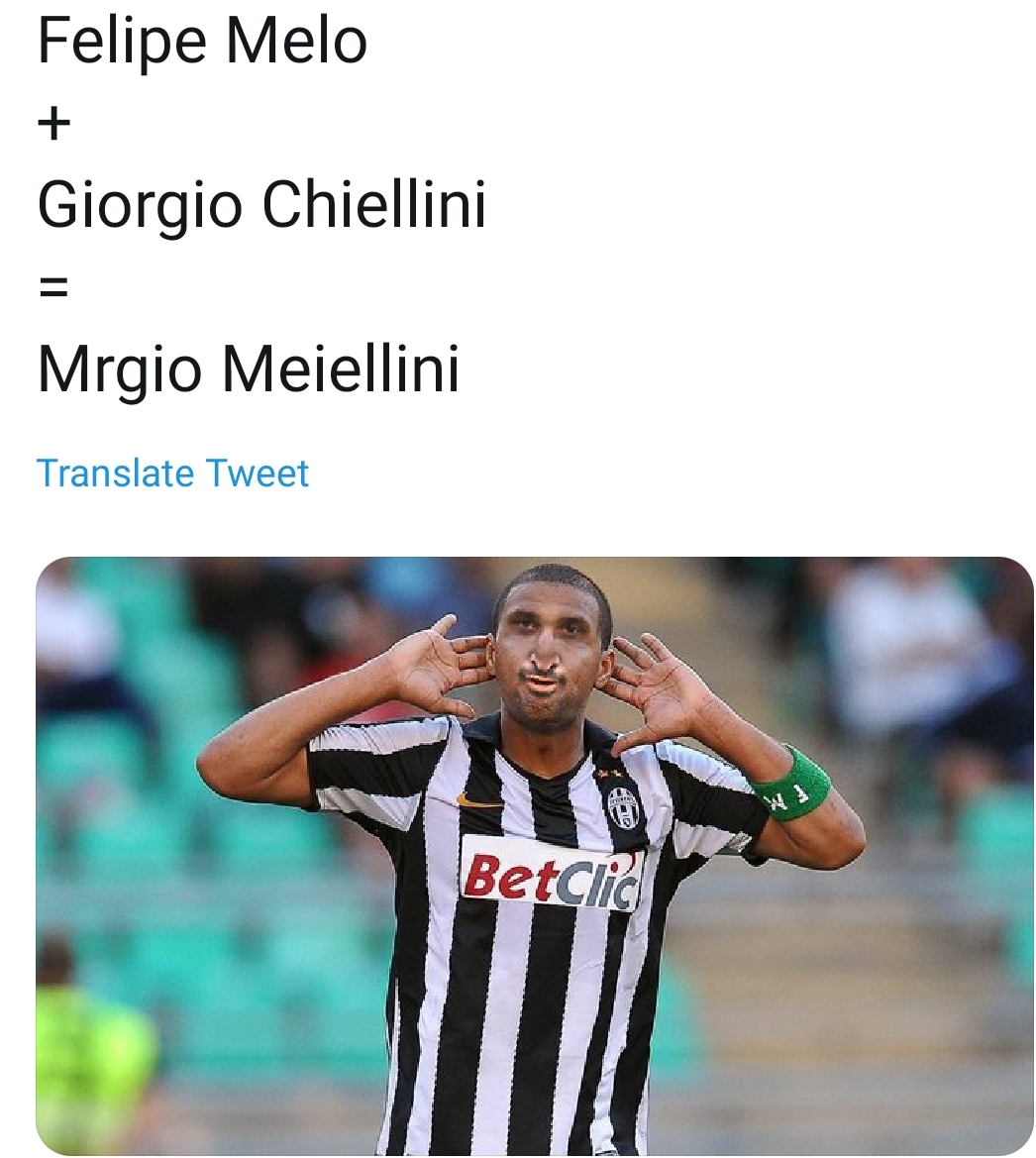 Italy legend Marco Tardelli has criticised Giorgio Chiellini for his ‘truly disappointing’ comments about teammates and opponents. ‘I learned respect from my captains.’


“I am truly disappointed to read the comments of Giorgio Chiellini, captain of the Italy squad, of Juventus and key man in the Players’ Association directive,” wrote Tardelli on Twitter.
“Tough words towards his teammates – colleagues who ought to consider him a reference point. Declaring hatred towards another club only creates hatred.
“Respect for the opponent in even the toughest battles, that’s what I learned from captains like Dino Zoff and Gaetano Scirea.”

Respect for opponent is one thing, playing for them and managing them is another. Tardelli with an opinion on football rivalries.

"in 2014, in brazil not only chiellini told those things to balotelli face to face, but others from the nazionale too. but it was useless, because" fuck my english and italian, he's saying something like "there's nobody more deaf than he who's not willing to listen"

Literally what you translated is correct. It is also a colloquial phrase, essentially saying that it's a pointless task.

Maybe Giorgio should wait for retirement before he stirs the pot further with replies to the two idiots.

I notice Moratti with very sly comments again. "Mario is always treated like this". I don't like the racism connotations he used there. Mario is an idiot, that's the problem. Absolute waste of a career as well, he could have had 90+ Italy caps.

Badass Dybala said:
But when materazzi slates Juve nobody bats an eye lid. When chiellini says he hates inter or anyone... its fucking civil war


Send him a picture of his red card at the 2010 world cup, that'll cheer him up

Are you some kind of literary critics over here?

The only one that can have a real issue with Chiellini is Juventus FC. If they were planning to hire those guys in the first place and now it's complicated.

Teammates can blame him for team-related performances only: "Now, that you've offended Balo he will start crying throughout the rest of the game and won't be able to concentrate."; "Now that you told Melo the truth he got so mad he raped the referee for a questionable indirect free-kick against him. We gonna lose this one on a technicality and it's on you Chiello...!" or something along the lines.

Both those players are far and away from ever being needed around Chiello. I guess if Tardelli wants to win trophies with Balo he can sign up for Seria B next year with Brescia. I am certain they will fail that too.
You must log in or register to reply here.
Share: Facebook Twitter Reddit Pinterest Tumblr WhatsApp Email Link